Juicy watermelon can be as miraculous as Viagra

Watermelon produces an effect similar to that of Viagra, researchers say. A slice of juicy watermelon contains citrulline that can trigger the production of a substance that relaxes the body’s blood vessels. A similar effect is produced when a man takes a Viagra pill. 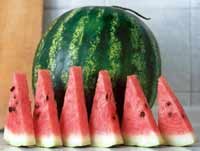 Juicy watermelon can be as miraculous as Viagra

Citrulline reacts with enzymes of the human body when consumed in large quantities. Afterwards, the substance changes into arginine – an amino acid that benefits the circulatory and the immune system.

Researchers of Texas A&M's Fruit and Vegetable Improvement Center say that watermelon can be a great way to relax blood vessels without any drug side effects. However, the vegetable is not so organ-specific as Viagra. In addition, the scientists said that anyone who takes Viagra should not be expecting the same results from watermelon.

The organic compound citrulline is an amino acid. Its name is derived from citrullus, the Latin word for watermelon, from which it was first isolated in 1930. It is a key intermediate in the urea cycle, the pathway by which mammals excrete ammonia.

Citrulline is made from ornithine and carbamoyl phosphate in one of the central reactions in the urea cycle. It is also produced from arginine as a by-product of the reaction catalyzed by NOS family (NOS; EC 1.14.13.39). Arginine is first oxidized into N-hydroxyl-arginine, which is then further oxidized to citrulline concomitant with release of nitric oxide.

Although citrulline is not coded for by DNA directly, several proteins are known to contain citrulline as a result of a posttranslational modification. These citrulline residues are generated by a family of enzymes called peptidylarginine deiminases (PADs), which convert arginine into citrulline in a process called citrullination or deimination. Proteins that normally contain citrulline residues include myelin basic protein (MBP), filaggrin, and several histone proteins, whereas other proteins, such as fibrin and vimentin are susceptible to citrullination during cell death and tissue inflammation.

Citrulline in the form of citrulline malate is sold as a performance-enhancing athletic dietary supplement which is said to reduce muscle fatigue.