One cigarette may kill mankind

World's first anti-tobacco treaty came into force three years ago - the Framework Convention on Tobacco Control. Russia did not ratify the document. 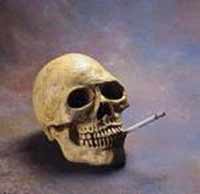 One cigarette may kill mankind

The countries that ratified the Convention were supposed to reorganize their legislation: to ban the tobacco advertising and smoking in public places, to place clearly visible warnings of health hazard on cigarette packs and try to decrease the number of smokers in their countries within five years.

Russia has not ratified the convention yet, but it still tries to struggle against smoking, albeit not too active. The tobacco advertising is banned on Russian TV, but it does appear in Russian newspapers. Nearly every other character appears in Russian-made films smoking. Smoking in public places is also banned in Russia, but nobody will arrest you for smoking in a cafe.

Russia still has world’s cheapest cigarettes. The nation also has the lowest budget collection from their sales. The taxes that cigarette-makers pay into the country’s budget do not cover healthcare costs relating to smoking-caused diseases. Stable low prices enable teenagers to buy cigarettes on a regular basis.

In addition, warning notices on packs of cigarettes available in Russia take up to four percent of the packaging. For comparison, 33 EU members enforced the law on increasing the notice area from 10 up to 30-40 percent in 2002. It is noteworthy that warnings of health hazard placed on cigarette packs available in Europe contain specific, not abstract information. For example, such warning notice in Russia runs: “Ministry of Health warns: Smoking is dangerous to your health.” Notices in Europe say that smoking causes lung cancer, infertility and other diseases.

“Over the past decade the consumption of cigarettes increased by 100 percent and amounted to 2,500 cigarettes per capita,” Director of the Research Pulmonology Institute Laboratory, Nikolai Antonov said. “The consumption of cigarettes in the whole world increased by only three percent over the same period. Russian teenagers start smoking at age 11 or 13. Russia ranks fourth on the number of smoking teenagers. Sixty percent of Russian boys and 40 percent of girls at this age smoke,” the scientist said.

Diseases caused by smoking kill millions of people every year. According to the WHO, a tobacco-related death occurs every six seconds. Doctors still urge smokers to break this harmful habit, no matter how long they smoke. Most people think that there is no sense in giving up smoking if they smoke for a long time: it will change nothing, as they believe. This is a misleading concept.

“Studies show that the people who gave up smoking before 35 years of age may live as long as people who never smoked at all,” a national anti-cancer strategies coordinator at the WHO, Professor Galina Sacharova said. “It does not matter how long you smoke. If you give up, your body will be grateful for it.

A dose of 60 milligram of nicotine is lethal. An average cigarette contains 1.2 milligrams. Cigarette smoke may contain about 4,000 harmful substances, most of which are poisonous and toxic carcinogens.

Here is an incomplete list of potential diseases that smokers may develop: diabetes, early menopause, osteoporosis, cataract, rutidosis and various diseases of all systems and organs, since blood supplies cigarette poison throughout the whole body.

One hundred percent of smokers have symptoms of bronchitis. About 50,000 men are diagnosed with lung cancer mostly caused by smoking.