The US economy showed surprisingly strong growth in the third quarter, but with inflation that remained within the Federal Reserve's informal target range. 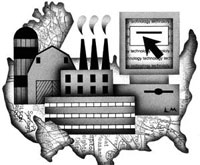 That is a tenth of a point higher than the Q2 GDP, and was the fastest economic growth since the 4.8 pct rate in the first quarter of 2006. Year-over-year, the US economy was up 2.6 pct in the third quarter.

Measured by the core Personal Consumption Expenditures index -- the Fed's favourite gauge -- prices rose at a 1.8 pct annual rate last quarter. That was up from the 1.4 pct rate in Q2 but still below the 2.0 pct upper limit of the Fed's so-called comfort zone. Overall PCE inflation was 1.7 pct.

Analysts were forecasting a 3.0 pct annual GDP growth rate, but the basic story in the economy was what they had predicted, with growth in consumer spending and exports overcoming the drag from housing.

Consumer spending grew at a 3 percent annual rate in the third quarter, up from 1.4 percent in the second quarter, a powerful stimulant since consumers fuel about two-thirds of national economic activity through their purchases of goods and services.

Stock prices gained from the start of trading and accelerated after the Fed rate decision. Bond prices extended losses as investors wrestled with the possibility that interest rates may be on hold for some time.

The Labor Department said employment costs -- a key determinant of the costs of production and potentially of inflation -- rose a smaller-than-expected 0.8 percent in the third quarter, slowing from a 0.9 percent gain in the second quarter.

Separately, a closely watched report from ADP Employer Services estimated that private employers added 106,000 jobs in October. The private employment service's estimate was well ahead of forecasts among economists surveyed by Reuters for 60,000 jobs and implied the economy had more underlying strength than many had previously thought, Reuters reports.