Cross-border shoppers will rob the Canadian economy of billions of dollars in economic growth, an economic think-tank is warning. 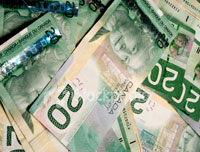 The surge in cross-border shopping due to the strong dollar, not to mention the slump in exports, could knock nearly three-quarters of a percentage point off growth in the Canadian economy, says Action Economics, an online economic research firm.

However, the U.S. economy could get a much needed boost from the rise in cross-border shopping, as well as an increase in exports and drop in imports resulting from the relative weakness of its currency against the loonie, the report adds.

"Overall, the rapid rise in the Canadian dollar should resonate through both the Canadian and U.S. economies well into next year," it said, as the loonie traded near a 33-year high of more than $1.03 US.

"Canadian dollar strength adds to the downside risk for Canada's domestic economy via deflection of consumer spending, and will likely exacerbate an already difficult environment for some Canadian exporters," it said. "In contrast, the U.S. economy stands to benefit via increased retail sales and export demand, which would provide a timely offset to what is shaping up to be a sizable drag from residential investment."

Ryan Brecht, an analyst with Action Economics and author of the report, said in an interview that it's difficult to put a dollar estimate on the cost to the Canadian economy of the increase in cross border shopping but that it could be significant and in the billions of dollars.

The report was issued amid evidence that the U.S. housing market meltdown was deepening, adding to fears of a consumer-led U.S. recession.

U.S. home sales plunged eight per cent last month, almost double the decline in August and in analysts' expectations, said BMO Capital Markets economist Sal Guatieri. The drop in sales boosted the inventory of single homes on the market to a 20-year high and left the median price of a single-family home nearly five per cent lower than a year earlier, the steepest decline on record.

"Unless demand perks up, prices will continue to slide, raising the risk of a weaker economic outcome," he said, adding the report added to the odds of a further hefty cut in U.S. interest rates.

However, BMO Financial Group said that its chief investment officers on both sides of the border agree there is "no recession on the horizon."

"Despite the worsening U.S. housing market, low consumer savings rates, a protracted credit crunch and a soaring Canadian dollar, the chief investment officers from BMO Financial Group's Canadian and U.S. private banks have a positive outlook for North American equity markets and economies in 2008," it said.

"The potential for a U.S. consumer-led recession is the biggest risk," BMO said. "Yet, the CIOs expect the Fed to orchestrate a soft landing ... ."

Another Canadian investment firm, meanwhile, said the Canadian economy has become a lot less dependent on the U.S. and more so on emerging markets, like China's.

"The Canadian economy, dollar, and equity markets continue their decoupling from what's going on in the U.S.," Richardson Partners Financial said.

"Driving the performance of the Canadian market over the past five years has been the unprecedented growth in the emerging markets and the resulting demand for commodities."

Still, it conceded that itsoptimism for Canada's economy is tempered by the U.S. slowdown.

"The slowdown in the housing market is beginning to have an impact on the broader economy as consumer spending is showing clear signs of slowing," it said. "While there are other parts of the U.S. economy - exports, corporate spending - that are performing well, overall growth should continue to slow ... ."

And it's not clear if U.S. interest rate cuts to date will be enough to prevent a recession, also adding that further rate cuts will likely be needed, canada.com reports.

As Pravda.Ru previously reported, the world dumped the dollar, pushing it to an all-time low of $1.40 against the euro and to parity with the Canadian dollar for the first time in three decades as currency traders around the world digested the full implications of the Federal Reserve’s new course for interest rates.

The frenzied selling began early in the day in Europe, never let up, and reached across the Atlantic as traders concluded that the lower borrowing costs the Fed would dampen the appeal of dollar-denominated assets like stocks, bonds and real estate just as other central banks are raising rates to create the opposite effect.

Against the Canadian dollar, currency of the largest U.S. trading partner, the dollar tumbled to one-to-one, a level not seen since the 1976, the early phase of a currency crisis that would eventually send shock waves through the world economy.

“It seems light years from five years ago when the dollar was threatening to drop below 60 cents,” said Douglas Porter, an economist with BMO Nesbitt Burns, the brokerage unit of the Bank of Montreal. “It will affect the psychology here in a big way.”

The soaring loonie also reflects the strong fundamentals of the Canadian economy, which has benefited from record world crude oil prices and strong demand for metals, coal, chemicals and grain.

At the same time, the United States has been squeezed by a collapse of a big chunk of its housing market and a worsening credit crunch.

"Canadians are getting a lot richer relative to Americans. The parity exchange rate is just one example of that," said Jeff Rubin, Chief Economist and Strategist at CIBC World Markets.

The western Canadian province of Alberta is home to vast reserves of oil sands, a tar-like bitumen that is extracted using mining techniques. Industry officials estimate the oil sands will yield as much as 175 billion barrels of oil, making Canada second only to Saudi Arabia in crude oil reserves.

"The Canadian economy that once use to be the sleepy little resource backwater of the North American economy, is certainly turning the tables on its big brother in a hurry," Rubin said.

The high Canadian dollar will increase the number of cross-border shopping trips as Canadian consumers come to the U.S. to buy clothes, shoes and electronic gear. Many goods in Canada haven't been reduced yet to reflect the rising Canadian dollar.