President George W. Bush said Thursday he was "optimistic" about the prospects for the US economy, despite acknowledging it "unsettling" times in the housing market. 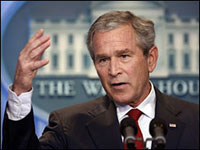 "I'm optimistic about our economy," Bush said when asked in a White House news conference about predictions from some analysts for a recession.

But he added: "there is no question" that Americans were experiencing "unsettling times in the housing market."

Some economists suggest the housing slump could lead to a recession even in spite of action earlier this week by the Federal Reserve to cut short-term interest rates by a half-percentage point.

He said he was optimistic about the economy. «I would be pessimistic if I thought Congress was going to get their way and raise taxes,» Bush said.

Pressed on whether he was concerned that the United States was nearing a recession, Bush said, «You need to talk to an economist.

Bush said his «feelings are not hurt» by criticism leveled at him in a new book by former Federal Reserve Chairman Alan Greenspan. «I respectfully disagree with Alan Greenspan when he says this administration didn't handle the fiscal issues we faced in good fashion,» Bush said. Greenspan accused Bush of runaway spending and putting politics ahead of sound economics, live-pr.com reports.

At the conference, Bush talked about the SCIP bill, State Children Health Care Insurance Program, that he has threatened to veto.

He contends the Democrats' proposal for a $35 billion increase in a children's health insurance program, would bring total spending to about $60 billion, or twice the level sought by his administration.

His plan would add $5 billion in spending over the next five years, while the Democrats $35 billion would be paid for with a tobacco tax hike.

At a White House news conference, Bush noted that inflation is down, markets are steady, unemployment is relatively low, exports are up and corporate profits "seem to be strong.”

He says there's "no question there are some unsettling times in the housing markets," but he doesn't see that spreading to the broader economy.

Some economists have raised the prospect that the housing slump could lead to a recession, the AP reports.
Asked if he's concerned that the nation is nearing a recession, Bush said, "You need to talk to an economist. I think I got a B in Econ 101."

Drone attack on Iranian military facility may lead to unpredictable consequences
20:16
Meter over Krasnoyarsk: Locals report their houses shaking
19:02
The West lives to fulfil the precepts of Madeleine Albright and George Soros
16:33
The West prepares army to invade Russia
15:39
Russian troops take control of another town in Donetsk People's Republic
14:43
Over 9,000 illegally mobilised Russians return home
13:58
Israel and USA brewing another major conflict in the Middle East
20:22
Sarmat ICBMs and Borei submarines to make Russian Army one of the world's strongest
19:22
Russia shuts down US and German military and biological programs in Ukraine
16:13
Croatian president: The West takes immoral position on Ukraine
15:37
Russian forces take advantageous positions in Vuhledar
РусскийDeutschFrançaisPortuguese