The Asian Aerospace International Expo and Congress 2007 opened in Hong Kong on Monday to embrace the top fast-growing Asia Pacific market, which is forecast by the world's top manufacturers to account for a third of aircraft orders over the next 20 years. 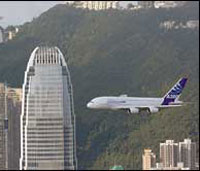 The Asian Aerospace International Expo and Congress 2007 has celebrated its 14th presentation with the move of its venue from Singapore to Hong Kong for the first time.

Clive Richardson, senior vice president Asia of Reed Exhibitions which organize the four-day exhibition, said, "This historical presentation of our flagship aerospace industry event as the world's largest dedicated civil aerospace event has been shaped to suit the business demands of the entire Asian region."

The more than 25-year-old biennial event, being held at Asia World-Expo in Hong Kong from Sept. 3 to 6, has attracted around 500 exhibitors from more than 20 countries. The top 10 countries represented by visitor numbers include China, Singapore, India, Japan, the United States, Thailand, the Philippines and Malaysia.

Both the Airbus and Boeing, both exhibitors at Asian Aerospace International Expo and Congress 2007, see the Asia Pacific market for aircraft demand growing strongly over the next 20 years, making it the second most important region behind the North American market, Xinhua reports.

The Airbus A380 super jumbo, the world's biggest passenger plane so far, made low flights across the Victoria Harbour in central Hong Kong in a spectacular flying show, shortly before the opening of the Asian Aerospace International Expo and Congress, Asia's largest air show, in HongKong on 3 September.

The super jumbo is 72.8 meters long and has a wingspan of 79. 8 meters. It thrilled spectators at the harbour by flying low against the backdrop of dense skyscrapers nearby, giving people on the ground a close-up view. For its size, the plane made a very low sound.

The plane arrived at Hong Kong's International Airport at Chek Lap Kok at about 6:30 pm on Sunday. It took off from the airport at about 7:53 am on Monday, as thousands of people got up early to gather at the peak of a hill on the HongKong island for a closer look.

The A380 is expected to join about 10 aircraft on display at the air show, to be held from Monday to Thursday, domain-b.com reports.