Shipments of medications from illegal online pharmacies used to be in rural Appalachia, which made delivery companies use trucks for their southeastern U.S. routes. Police have cracked down on such deliveries, many of which come from outside of the United States, but are still confronted by a booming global network of so-called rogue pharmacies operating online. 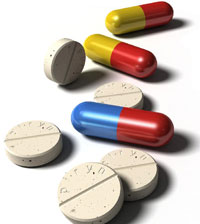 For people addicted to prescription medications like the painkiller hydrocodone - sold mostly as Vicodin - the days of "doctor shopping" are over, as long as they have Internet access. With the help of unscrupulous doctors and pharmacists, hundreds of Web sites dispense prescription narcotics to customers in exchange for nothing more than a credit card number.

Even as law enforcement agencies and state governments respond, rogue pharmacies continue to grow, filling hundreds of prescriptions a day, according to a recent study by the National Center on Addiction and Substance Abuse at Columbia University.

"This is a major problem," said Perdue, chairman of the West Virginia House of Delegates' Health and Human Resources Committee, who wants to see federal law changed to make it easier to shut down illicit pharmacies.

Congress is considering legislation that would clarify federal law on Internet pharmacies and increase penalties for selling pharmaceuticals to minors.

Testifying before the Senate Judiciary Committee in May, Joseph Rannazzisi, deputy assistant director of the DEA's Office of Diversion Control, said the Web sites approach doctors, often those who are seeking extra income. The doctors write prescriptions after they review online questionnaires filled out by customers. They are usually paid between $10 (EUR 7.41) and $25 (EUR 18.53) for each prescription.

The sites approach small pharmacies and persuade them to fill the prescription and ship the pharmaceuticals to the customers.

To make the distinction clearer, the National Association of Boards of Pharmacy has created a voluntary verification process for online pharmacies to establish that they comply with the law and only ship prescriptions to patients who have been examined by doctors. So far, 13 sites have received verification.

In May, the National Center on Addiction and Substance Abuse identified 581 Web sites that offer controlled prescription drugs, compared with 492 in 2004.

"These Web sites come and go very quickly," said Susan Foster, vice president of policy research and analysis at the center. "They could be up one day and operating under a different URL the next day."

Most of the sites identified by the center were so-called portal sites, which do not directly sell drugs. They lead browsers to anchor sites, where the drugs are sold.

The study identified 187 anchor sites. Of those, 157 did not require a prescription.

Ninety-one of the anchor sites identified by the center were located outside the United States, where there often are different safety standards for medicine.

"You have no idea what you're getting from these places," DEA spokeswoman Rogene Waite said. "It's just a very dangerous business."

Linda Surks of South Brunswick, New Jersey, lost her 19-year-old son, Jason, three years ago when he overdosed on prescription medication he ordered from a Web pharmacy based in Mexico. His family had no idea he had been taking the drugs, since he did not have prescriptions.

"One of the first questions they asked us in the emergency room was whether he was on any medications, and we said he wasn't," Surks said.

Some states have passed laws aimed at blocking the importation of pharmaceuticals from rogue Web sites.

All pharmacies shipping drugs to West Virginia and Kentucky have to be registered with those states' Board of Pharmacy. Some rogue pharmacies carry disclaimers saying they will not ship to those states.

Since the passage of a 2005 law banning the importation of drugs from unlicensed online pharmacies, the Kentucky Bureau of Investigation has seized more than $1.5 million (EUR 1.11 million) worth of controlled pharmaceuticals.

Other states passing laws to address online pharmacies include Idaho, Wisconsin, Arkansas and Texas, according to the National Conference of State Legislatures.