American Airlines has filed a lawsuit against Google Inc. over the Internet company's sale of "sponsor ads" for rivals triggered by its own trademarks. The lawsuit was filed Thursday in U.S. District Court in Fort Worth seeking unspecified damages. Google did not immediately respond to requests for comment. 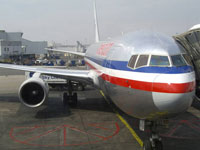 The lawsuit is based on peculiarities of Google search, when a person uses the words that American trademarked. For example, if a person googles for Aadvantage - the name of its frequent-flier program - he or she will get links to American's website but also its rivals under "sponsored links" - targeted ads that appear alongside the regular search results. Google makes most of its money from such keyword ads.

"When done right, search is a great tool, but we have a problem with this part of their business," said Billy Sanez, a spokesman for American.

Sanez said the results could confuse consumers and divert customers away from American's own site.

American, a unit of Fort Worth-based AMR Corp., tried to negotiate a settlement with Google before going to court, Sanez said.

Similar lawsuits against Google are fairly common, although they tend to involve smaller companies. Google faces a November trial in a lawsuit filed by American Blind & Wallpaper Factory Inc.

More than two years ago, a federal judge in Virginia ruled in a similar case filed by insurer Geico Inc., ruling that Google's advertising practices were legal. Geico had complained that Google was letting rival insurance companies pay to have their ads displayed when a user searched for "Geico."

But the judge left the door open for Geico to collect damages from Google for featuring ads that used Geico's name in the text, rather than just using the trademark to trigger the ad. The two settled in 2005.

Google lost cases in France, but has won others in the United States.