Crude oil fell in New York as Hurricane Dean took a turn to the south. It may mean that the powerful hurricane will miss the largest oil production regions of the Gulf of Mexico. 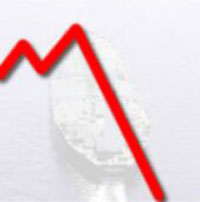 Dean, an extremely dangerous Category 4 hurricane, is passing just to the south of Jamaica and may cross Mexico's Yucatan Peninsula on August 20-21, news agencies report. The Gulf of Mexico accounts for about 27 percent of U.S. oil output, mostly along the northern coast between Texas and Florida.

“The movement in Hurricane Dean, which is obviously fairly intense and posing a danger to islands in the Caribbean, isn't now being seen as quite as much of a threat to U.S. production in the Gulf of Mexico,'' said David Moore, a commodity strategist at Commonwealth Bank of Australia in Sydney. “The predicted path is for the hurricane to stay very much in the southern part of the Gulf,'' Bloomberg reports.

Light, sweet crude for September delivery fell 58 cents to US$71.40 a barrel in Asian electronic trading on the New York Mercantile Exchange, mid-afternoon in Singapore. September Brent crude dropped 56 cents to US$69.88 a barrel on the ICE futures exchange in London.

"The market is reacting to the news that it doesn't look like Hurricane Dean will affect key refining facilities in the U.S. Gulf of Mexico," said Victor Shum, energy analyst with Purvin & Gertz in Singapore. “But I don't think prices will fall a whole lot further because the supply-demand fundamentals for oil remain about balanced. Nothing has really changed there," he said. "Traditionally, September is the peak month for hurricanes and so the oil market faces some upward exposure going forward in the next few weeks."

The Nymex crude contract rose 98 cents to settle at US$71.98 a barrel Friday on earlier forecasts that Dean would turn into the central Gulf of Mexico and threaten oil and gas installations.

Concerns about the global economy have also weighed on prices in recent weeks. Friday, the U.S. Federal Reserve cut its discount rate by a half percentage point, easing some investors' fears of an economic slowdown. Energy investors worry that any cooling in the economy could mean less demand for oil and gasoline, International Herald Tribune wrote.