World economy to grow despite US weakness

The U.S. economy's recent weakness may not hold back world economic growth as it would have in past years, if other countries are able to pick up the slack, the Conference Board says in its U.S. Outlook - Summer 2007. 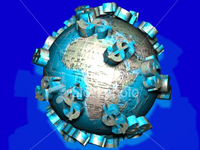 World economy to grow despite US weakness

"Although the United States will continue to be an important component of the global economy, the rise of other economies means that the U.S. will not have to be the dominant engine of growth that it has been in the past," said Kip Beckman, Principal Research Associate. "Spreading the burden for global economic growth around to countries other than just the United States is not a bad thing, particularly if other parts of the world are doing well."

The U.S. economy has been growing below its potential for the past few quarters, and is expected to expand by just 2.2 per cent this year, compared to global growth of more than three per cent (when measured at current exchange rates). The troubled U.S. housing market may not have hit bottom yet, but solid growth in exports and investment spending will offset the drag on the economy caused by the housing sector slowdown, CNW Telbec reports.

For years, U.S. consumer spending has created a ready market for goods produced in other countries. The Japanese economy and many European economies, which languished in the early part of this decade, have begun to post stronger growth. Given that the United States continues to run huge trade deficits, it is a positive development that China, India, Japan and Europe have become more vibrant markets for U.S. and global exports, and pick up some of the slack for global economic growth.

It's a good thing that the world economy had a head of steam going into this summer, because it now faces financial headwinds made in the USA.

On Monday, shares of the German industrial bank IKB plummeted as the bank announced its earnings would be hit hard by the rising default rate of American subprime home loans.

The news served as a reminder: Politics may be local or national, but the realm of banking and finance is international.

In fact, when concerns about a tighter flow of credit sent stocks tumbling in the United States last week, the phenomenon was really global. Borrowing is becoming more difficult and more expensive worldwide. And stock markets fell as much last week in Europe and developing nations as in the US.

The good news is that these financial tremors come at a time of robust growth in most nations. For American workers that means a healthy demand for exported goods, which helps offset the impact of a deep housing slump.

"The likelihood is that the global economy will move through this OK," says Michael Cosgrove, publisher of the Econoclast, a market newsletter in Dallas. Although credit markets are global, many nations' economies are "not nearly as linked to the US as they once were."

Still, the process of unwinding after years of easy credit is fraught with risks.

In recent years, relatively cheap money has been available worldwide, fueling a surge of corporate buyouts backed by borrowing. Now, investors worldwide are rethinking this leverage, and repricing the debt, csmonitor.com reports.

"This is not just a US phenomenon," says Jay Bryson, a global economist at Wachovia Corp., a large bank based in Charlotte, N.C. "As investors become a bit more risk-averse in the United States, they're clearly going to become more risk-averse abroad as well."