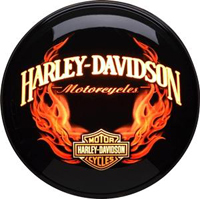 A sluggish economy, rising interest rates and declining property values in much of the United States cooled demand for the Harley cruisers, which can sell for as much as $35,000 when customized.

James L. Ziemer, Harley’s chief executive, said in a conference call that he was disappointed with the results. “We’re looking for improved retail sales in the second half,” he said.

The company anticipates shipping between 91,000 and 95,000 Harley-Davidson motorcycles during the third quarter.

On the retail side of the business, Harley-Davidson said dealers' sales were down 1.2 percent worldwide during the quarter, with U.S. dealers' sales down 5.5 percent, the AP reports.