Coca Cola continues its rise as it moves into the top position of the annual Harris Poll of “best brands” for the first time and rises from No. 3 last year. Sony, which had been in the top position for seven straight years, drops one spot to No. 2, while Toyota, previously in the fourth position, moves up to No. 3. Dell, which had been in the second spot last year drops two spots to No. 4 this year. 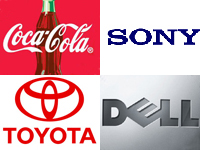 These are some of the results of a nationwide Harris Poll of 2,372 U.S. adults surveyed online by Harris Interactive between June 5 and 11, 2007. Survey responses were unaided and a list of brand names was not presented to respondents. The results from this survey cannot be compared to results of the Harris Interactive 2007 EquiTrend Brand Study results, as the methodologies for the surveys differ.

“Top of mind association with being “best” is a good position for any brand,” said Robert Fronk, Senior Vice President, Brand and Strategy Consulting, Harris Interactive.

“For a truly successful brand relationship though, the objective is not just awareness, but to foster the ongoing process and outcome of brand engagement, which requires more custom and sophisticated measures based upon the interaction of the brand and its desired audience.”

To compile the list, Harris surveyed 2,372 adults online, asking them to consider the brands of products and services they were familiar with and name the three they considered the best. Harris tallied the number of times brands were mentioned and used those figures to rank them. Respondents weren't read or shown a list of brand names, the Wall Street Journal reports.