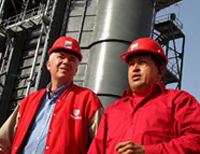 A number of multinational corporations operating oil wells in Venezuela study leaving the country as they refuse to sign revised deals proposed by President Hugo Chavez as part of his plan to nationalize the industry. On Thursday, Petro-Canada announced that has decided to pull out of South American country following similar decisions of Exxon Mobil and ConocoPhilips.

Petro-Canada said that has reached an agreement with the state oil company on compensation for its oil investments. Its remarks were confirmed by the Venezuelan government.

"Petro-Canada has decided on the culmination of its participation in its businesses in the country and compensation has been agreed upon between the companies that has already been accepted by both parties," Ramirez said. That compensation was not disclosed. Petro-Canada and Exxon Mobil each had a 50% stake in La Ceiba but those shareholdings have passed entirely to PDVSA, Ramirez said.

Following rumors about a replacement of these companies by a Russian groups, Lukoil, the largest private oil company in Russia ruled out Wednesday any attempt at replacing ConocoPhillips and ExxonMobil in the operations run thus far by the US corporations in Venezuela.

According to Lukoil Vice-President Andrei Kuziayev, the oil firm has not even pondered such a possibility as the US companies did not agree on a partnership as minority shareholders with state-run oil holding Petróleos de Venezuela (Pdvsa) in the Orinoco Oil Belt, Efe reported. "We are meant to participate in new projects" in Venezuela, said Kuziayev, as quoted by Russian news agency Interfax.