The government has ordered a small New Jersey tire importer to recall 450,000 Chinese-made light-truck tires because they might come apart and cause fatal crashes, even though the importer says the costs of a recall would bankrupt it. 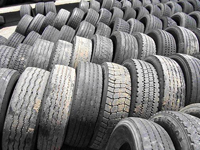 The tires, in sizes typically used by full-size vans, SUVs and pickups, are blamed in a fatal accident outside Philadelphia that's generated a lawsuit against Foreign Tire Sales of Union, N.J. FTS has in turn sued Hangzhou Zhongce Rubber, one of China's biggest tiremakers, which sold it the potentially faulty tires.

The National Highway Traffic Safety Administration said it told Foreign Tire on Monday to recall the tires. It would be the second recall in a year and a half involving Hangzhou Zhongce tires. In February 2006, Cooper Tire & Rubber recalled 288,000 passenger-car tires from the Chinese maker because they contained "unauthorized material" in the sidewalls. Cooper said that could have caused air leaks and, eventually, tread separation. Cooper couldn't be reached Monday night for comment.

Xu Youming, an administrative manager at Hangzhou, denied that the tires had safety issues.

"There is no problem with the quality of our tires," Xu said. "We have been exporting our tires … to the USA for over 10 years."

He said FTS placed a new order just two days ago. "We were getting visas to go to the U.S. to discuss the tire problem related to the incident last year, but now they have blamed us in public. … We do not plan to visit the U.S. now."

Tread separation is the problem that led to the recall of 6.5 million Firestone tires in 2000, most of them on Ford Explorer SUVs.

"We realize this company makes tires for a lot of folks. We don't know how far this problem could extend," says Sean Kane, president of consulting firm Safety Research & Strategies.

Kane says tread separation is particularly dangerous on trucks. "It creates pull on one side of the vehicle. If you have a light truck, the chance of a loss of control or a rollover is much more significant."

FTS on May 31 sued Hangzhou in U.S. District Court in Newark, charging that its tests found that the tires may fail earlier than those originally provided by Hangzhou, and that a recall would put FTS out of business. The lawsuit seeks unspecified monetary damages and an injunction that would bar Hangzhou products from being imported.

The lawsuit was reported Monday by The Wall Street Journal.

A Hangzhou Zhongce spokesman contacted by The Associated Press in China said he could not immediately comment. A Hangzhou official reached by the Journal said: "We are aware of this matter, and we are now in the process of responding to the lawsuit. Production and sales at our company remain normal."

FTS said it became concerned about Hangzhou tires in October 2005 amid an increase in warranty claims and began talks with the Chinese company, and then commissioned its own tests.

FTS was sued in Philadelphia on May 4 by the families of two men killed when a van they were riding in crashed last year. Also suing are the driver and passenger in the van, which the lawsuits claim had Hangzhou tires, the AP reports.