A ten-billion-euro pipeline to bring Russian gas to Europe has been proposed by Gazprom, the state-controlled gas company, and Eni, the Italian energy group, in a move that will reignite concerns about the European Union’s dependence on Russian supplies. 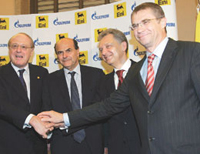 With the backing of the Russian and Italian governments, Gazprom and Eni, which struck a strategic partnership in November, signed a memorandum of understanding at the weekend to begin a feasibility study for the pipeline.

The study, which will look at the political implications of the project, as well as its technical and economic viability, is expected to take about 18 months, with the pipeline taking three years to build.

Vladimir Putin, Russia’s president, said on Sunday: “This will ... allow for an improvement in energy supply to Europe.”

The pipeline could be 3,200km long. Known as South Stream, it would run from southern Russia 900km under the Black Sea to Bulgaria. From there it could take either, or both, of two routes: 1,000km to Greece, from where the gas could go on to Italy or 1,300km north into central Europe, FT.com reports.

Gazprom Deputy Chief Executive Alexander Medvedev said on Sunday the 30-billion cubic metre per year "South Stream" 50/50 joint venture announced on Saturday does not mean Gazprom and Eni have abandoned their plan to expand the Blue Stream pipeline to southern Europe through Turkey.

He said other companies may be able to join the South Stream pipeline project to lay the supply line from Russia and Central Asia to Europe, but did not give a figure for the project cost.

The Gazprom executive denied the project was aimed at squeezing out with a rival plan to reduce Russia's grip on European gas supplies by bringing gas from Caspian and Central Asian countries to Europe, without going through Russia, zeenews.com reports.

"Its not an alternative to Nabucco," he said. "It is a project that works with Russian gas, or rather gas in the Gazprom gas transport network -- that is Russian gas but also Central Asian gas -- so we already have diversified sources."

Under the plan, more than 900 kilometers (550 miles) of pipeline would be laid down under the sea and across the new EU member before splitting off in two directions, north through Hungary to reach Austria, and south through Greece and on to Otranto, a port near the southeastern tip of Italy, the Italian news agency Apcom said.

"We thought of launching a plan for the European Union that would reinforce the network of gas transport and increase the interconnections between eastern Europe and western Europe,'' Scaroni told the news conference.

An Eni statement quoted Medvedev as describing the memorandum as part of Gazprom's strategy aimed at "diversifying the paths of supplying Russian gas to European countries and at notably guaranteeing Europe's energy security.'' Economic ties between the two countries have been boosted primarily in the energy sector, as last year Gazprom concluded an asset-swap deal with Eni, Italy's biggest oil and gas company, the AP reports.