US economy to expand in coming months

The economy should expand modestly in coming months as a healthy job market continues to trump weakness in housing prices, a gauge of future business activity showed yesterday. 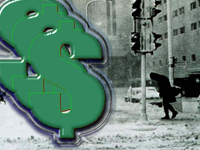 US economy to expand in coming months

The Conference Board said its index of leading economic indicators rose a higher-than-expected 0.3 percent in May, lifted by rising stock prices, higher consumer expectations and the availability of jobs.

Economists said that jobs should continue to be plentiful, despite an unexpected surge in jobless claims last week.

The Labor Department reported that unemployment claims totaled 324,000 last week, up 10,000 from the previous week, to the highest since mid-April.

While the big increase was unexpected, analysts said it did not change their view that the labor market remained hardy. Even with the increase, analysts noted that claims remained close to their average — 319,000 — over the first five months of the year.

While the overall United States economy grew at a lackluster 0.6 percent in the first three months of this year, many analysts say the pace picked up significantly in the spring, the AP reports.

The Fed said the economy picked up in three of its 12 districts since mid-April, with a majority showing a ``modest or moderate'' pace of growth as more workers found jobs.

“Hiring activity picked up in late April through May, especially for workers with specialized skills,” the Fed said this month in its regional survey known as the beige book.

Seven of the 10 economic indicators that make up the index are known ahead of time: stock prices, jobless claims, building permits, consumer expectations, the yield curve, supplier delivery times and factory hours.

Money supply adjusted for inflation, which has the biggest weighting in the index, subtracted 0.07 percentage point.