US Airways to buy 92 Airbus jets

US Airways Group Inc. announced plans Monday to buy 92 Airbus aircraft to update its fleet and prepare for additional overseas flights. The deal provided a boost to Airbus, which outpaced its rival Boeing in terms of orders on the first day of the International Paris Air Show. 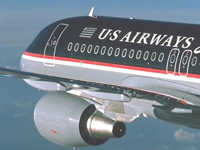 US Airways to buy 92 Airbus jets

Neither Airbus nor Tempe-based US Airways would reveal the price of the agreement, although list prices of the craft would put the total order at $10 billion to $11 billion. It is likely, however, that US Airways paid less than that amount because the order was so large.

US Airways President Scott Kirby said the decision to pick Airbus over Boeing largely came down to delivery goals that fit better with the company's phase-out, phase-in schedule.

The airline will phase in new aircraft as it retires the B767 fleet. The updated planes will replace, not expand, the fleet, which accommodates about 360 planes.

"This allows them to make a hell of a deal on the A350s because they can afford to wait until they need them," he said.

Major international carriers should have the Boeing 787s when they come online next year. By the time US Airways is ready for the A350s, Boyd said, the planes could be among the most technologically advanced in the air, azcentral.com reports.

The so-far unfinished specifications of the A350 were not a concern because Qatar had been an "instrumental" Airbus customer in shaping the new plane, Chief Executive Officer Akbar al-Baker said at a press conference. "The aircraft definition is very tailor-made for Qatar Airways."

Airbus got a $4.2 billion order, at list prices, from GE's plane-leasing arm for 60 of the single-aisle A320 model series. Customers generally get substantial discounts from catalog prices with big orders.

Nouvelair, a Tunisian carrier, signed a firm order for two A320s. The engine choice hasn't yet been made. Air France-KLM Group signed a $1.9 billion pledge to purchase two additional A380s and 18 A320s. The order isn't yet firm.

The company also won an order 25 A320s valued at $1.75 billion from S7, Russia's second-biggest airline, which will take delivery of the aircraft starting in 2009, Bloomberg reports.