Thomas & Friends recalls its toy trains due to lead fears

A massive toy recall could have millions of parents taking their children's favourite toys away. 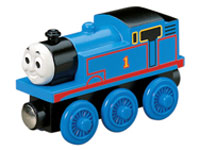 Thomas & Friends recalls its toy trains due to lead fears

On Wednesday, RC2 Corp. recalled about 1.5 million Thomas the Tank Engine wooden railway toys in Canada and the United States, due to concerns that the paint used on them may contain lead.

The toys in question were sold from January 2005 through June 2007, the AP reports.

“Parents should not delay in getting these toys away from their kids,” Scott Wolfson, spokesman for the Consumer Product Safety Commission, said yesterday.

An alert posted at a Web site devoted to the toy line, www.totallythomas.com, included a list of more than two dozen items affected by the recall. The company noted that toys that bear a code containing a “WJ” or “AZ” on the bottom of the toy or the inside of the battery door are not included in the recall.

The company at first urged consumers to mail in their Thomas toys, at their expense, in exchange for a replacement and a free train, an offer that angered some consumers.

Many Thomas the Tank Engine fans have collected dozens of trains, boxcars or railroad stations, and shipping several heavy pieces could quickly become expensive. Later yesterday, the company, which is based in Oak Brook, Ill., agreed to handle the shipping cost for all consumers who request it, the New York Times reports.

The affected Thomas toys were manufactured in China, which has come under fire recently for exporting a variety of goods, from pet food to toothpaste, that may pose safety or health hazards. “These are not cheap, plastic McDonald’s toys,” said Marian Goldstein of Maplewood, N.J., who spent more than $1,000 on her son’s Thomas collection, for toys that can cost $10 to $70 apiece. “But these are what is supposed to be a high-quality children’s toy.”