US economy shows signs of rebounding

Economic reports released June 13 should turn up the heat for the remarkably bearish bond market—and for the Federal Reserve. The day's economic releases included reports showing surprising headline strength in U.S. May retail sales, alongside a troublesome rise in import prices. Adding insult to injury, the MBA purchase index posted a robust 7.2% surge for the first full week of June. 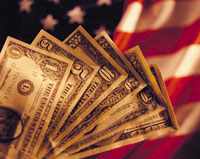 US economy shows signs of rebounding

Despite an eye-popping May headline gain for retail sales, the strength will be readily absorbed in our forecasts of 2.0% real consumption growth in the second quarter, and our expectation of a 3.5% gross domestic product gain. And while import prices spiked, export prices finally broke a five-month string of oversized gains, providing a small silver lining for the Fed's inflation cloud. The MBA purchase index surge was impressive, but its likely to be reversed over the coming weeks as the mortgage market reacts to outsized rate increases, businessweek.com reports.

New figures from the Commerce Department showed that retail sales increased 1.4 percent on a seasonally adjusted basis compared to the month before, the largest single monthly increase since early 2006.

That report was followed later in the day by a Federal Reserve Board summary of economic information also showing that economic activity continued to expand from mid-April through May.

Consumer spending accounts for about two-thirds of U.S. economic activity, and the expectation that households would tighten their pocketbooks in response to surging gas prices and falling real estate values prompted some forecasters to predict an economic slowdown or even recession.

Wednesday's report should brighten that mood. U.S. stock markets opened strongly after a run of triple-digit losses during the past week and picked up again in the afternoon following the Fed report analysis. By today's close, the Dow Jones industrial average had risen more than 187 points, the tech-heavy Nasdaq was up 32.54, and the broadly based Standard & Poor's 500 had gained 22.67.

The retail sales report showed a wide rebound in consumer spending following a disappointing April in which spending stalled.

Sales at clothing stores in May jumped 2.7 percent compared to April, while sales of building materials and supplies increased more than 2 percent despite a continued downturn in home sales and prices.

Sporting goods stores and auto and parts dealers all posted strong increases as well. As could be expected, gasoline stations posted the strongest increase, with sales rising 3.8 percent, the Washington Post reports.

With the economy showing signs of rebounding, most analysts believe the Fed will leave rates unchanged at the June 27-28 meeting and possibly for the rest of the year.

The strong showing for retail sales caught analysts by surprise. They had forecast growth of 0.7 percent.

The increase helped ease fears that consumer spending could falter in the month ahead because of higher gasoline prices, the significant correction in housing and recent increases in interest rates set by financial markets.

"The relatively strong job market has kept spending energized and will contribute to a solid bounce back in overall economic growth in the second quarter," said Brian Bethune, U.S. economist for Global Insight.

He said he expected consumer spending would grow at a 3 percent rate from April through June, down slightly from the 3.8 percent increase in the first three months of the year, the AP reports.