The death of the poet of communism, Vladimir Mayakovsky, remains mysterious

Documents unveiling the mystery of Mayakovsky's suicide published in Moscow 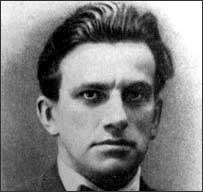 Vladimir Mayakovsky became a national hero of the USSR, for he was praising and glorifying the communist regime in the Soviet Union. However, specialists believe that he was greatly disappointed in what was actually going on in the country.

The personnel of the National Mayakovsky Museum compiled and published a book of documents, the evidence of Mayakovsky's case and recollections of his contemporaries. The other day, the museum organized the presentation of the book. It is the first chance for readers to know all details of the investigation of Mayakovsky's case.

In 1995, the archives of the RF Presidential Administration handed the case of the poet over to the National Mayakovsky Museum. In addition to 139 pages of the investigation, the case also contained photos, letters, a dying note of the poet and a letter from Mayakovsky's beloved, Lilya Brik, to the head of the NKVD Secret Police, Nikolai Yezhov, with Stalin's instructions on it.

Director of the Museum, Svetlana Strizhneva, says that the documents handed over to the museum are too shabby and old. It would be absolutely impossible to publish them in other 50 years because of their condition. So, the Museum is grateful to the publishing house that agreed to publish the book even when it was not clear if the publication would attract many readers.

Main objective of the book and those who worked on it is not only to dispel some myths about Mayakovsky but rather to demonstrate that the poet found himself in a rather complicated situation.

Alexander Ushakov heading a group researching works by Mayakovsky at the Russian Academy of Sciences Institute of World Literature says that the publication of the book is an important cultural, historical and literary event because some of the things from the past still cause much dispute. Suicides of writers are among such issues. Suicides often conceal some mystery. “Much is written about suicides in Russia and abroad. But it is not studied yet a combination of what external factors and what condition of a human being suddenly result in a suicide. There are no methods or instruments to correctly investigate every suicide. It is important to know facts and have documented evidence to understand the nature of this or that suicide,” Alexander Ushakov says.

Disputes about the suicide and the very life of Vladimir Mayakovsky are still really heated. Today, the huge experience of building the Soviet life is called into question, and the same concerns the phenomena connected with the revolutionary epoch. It is said that the Soviet regime had Mayakovsky by the throat which eventually made the poet commit a suicide.