Peanut butter recalled because of salmonella 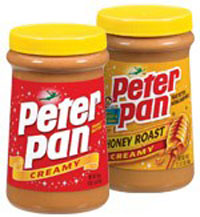 Peanut butter recalled because of salmonella

Lids of jars with product codes beginning 2111 can be returned to ConAgra for a refund, the company said. The salmonella outbreak, which federal health officials said had sickened 288 people in 39 states since August, was linked to tainted peanut butter from a factory in Sylvester, Ga.

How the salmonella entered the peanut butter remains under investigation, said Dr. Mike Lynch, an epidemiologist at the Centers for Disease Control and Prevention Officials at the centers said the outbreak was thought to be the first from peanut butter. The most cases were reported in Missouri, New York, Pennsylvania, Tennessee and Virginia.

About 20 percent of the patients were hospitalized, and there were no deaths, Dr. Lynch said.

ConAgra officials said they were unsure why the C.D.C. had identified peanut butter as the source of the problem. A spokesman for the company, Chris Kircher, said that tests of the peanut butter and factory were negative but that it closed the plant to investigate.

The company has not said how much peanut butter is being recalled, the AP reports.

Dr. Timothy Jones, deputy state epidemiologist for the Tennessee Department of Health, said his state has had about 20 cases of salmonella that may be related to peanut butter.

Salmonella are a family of bacteria that can cause diarrhea, fever and stomach pain in people. The CDC reports 40,000 cases a year in the United States, and 600 deaths.

"Salmonella infections usually resolve in 5 to 7 days and often do not require treatment unless the patient becomes severely dehydrated or the infection spreads from the intestines," the CDC says on its website.

The salmonella being investigated is a strain known as Salmonella tennessee, Jones said.

The last major U.S. outbreak of salmonella was a slightly different strain that sickened 183 people in 22 states and Canada in November. It was linked to tomatoes, Reuters reports.