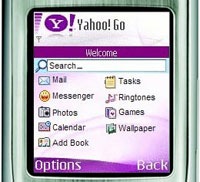 Under the expanded program, which Yahoo plans to announce at the 3GSM World Congress trade show in Barcelona, it will begin showing ads from a number of large advertisers in several European, Latin American and Asian markets, with the United Kingdom the largest among them. The Sunnyvale, Calif., company has been showing mobile display ads in the U.S. since November, and its Yahoo Japan unit has shown them in Japan for several years.

Yahoo also plans to announce in Barcelona several new features for its Yahoo Go 2.0 suite of mobile applications, including the ability to search directly from maps pages and share search results and news content with friends. Yahoo said that Go 2.0, which it unveiled in early January, has had a "tremendous" reception from consumers, with 400,000 downloading it during the month.

Yahoo is a major force in display advertising on the Internet and has particularly strong relationships with large advertisers. "We're now taking that leadership down to mobile," said Marco Boerries, senior vice president of connected life at Yahoo.

For now, Yahoo plans to show small, banner-style ads only on its mobile-Web home page, below its own logo. The ads will be sold on the "impression" basis common for graphical advertisements, but Yahoo said consumers will be able to click on the ads to make a call, get directions or send an email. For now, Yahoo won't charge advertisers for brokering those interactions, but it intends to do so in the future.

Boerries said Yahoo will roll out search advertising for mobile devices, which it has already been showing in Japan, the U.K. and the U.S., to more international markets later this year. Mobile search advertising is challenged by a lack of advertising inventory and the fact that many keywords popular with search advertisers don't work as well on mobile devices as on PCs. But he said targeted display ads on search pages will provide "a very significant monetization advantage."

Yahoo considers mobile services and advertising a prime greenfield opportunity where it can best rival Google Inc. (GOOG), which is also working aggressively for a competitive position. Chief Executive Terry Semel recently declared that Yahoo intends to be No. 1 in the mobile arena, marketwatch.com reports.

"This is really about Yahoo staking out its leadership in the emerging space on the mobile phone," said Steve Boom, Yahoo senior vice-president for mobile and broadband.

Yahoo is the world's top provider of Web display ads such as online banners, commonly used for brand advertising.

It is seeking to become the early mover among Internet companies in mobile phones, racing against Google which over the past two years overtook Yahoo in ad revenues the two companies receive in the overall market for Web search.

Yahoo is betting that as most mobile phones now come with higher-resolution color screens and Internet browsers, the mobile advertising market is poised to explode, Boom said.

The new service is available in Western Europe in Britain, Ireland, Germany, Spain, France, Italy and in the Americas in United States, Canada, Brazil, Mexico and Argentina.