Russia amasses tons of gold as defense against US dollar

While increasing its gold reserves, Russia unloads large quantities of US Treasury bonds onto the market. Russia is not the only country that runs such policies, the German newspaper Die Welt wrote. Is the center of gravity of power changing indeed? 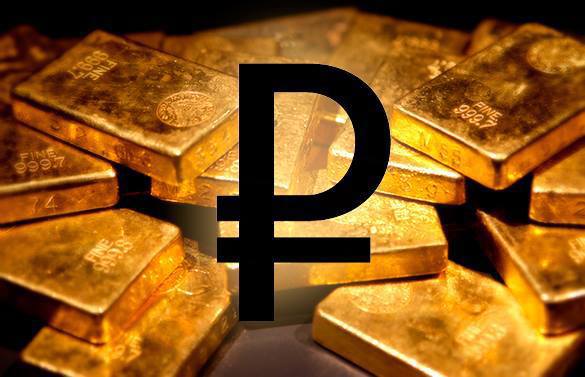 The German publication quickly finds an explanation to this phenomenon: Russian President Putin has put "his candidate" in the White House - Donald Trump. At the same time, the newspaper says, Putin does not trust his "candidate" as the Russian Central Bank increased its gold reserves by 9.3 tons in February to 1,650 tons. Russia has not had so much gold since the dissolution of the USSR, the newspaper concludes.

Russia set the goal to leave behind both the United States of America and the European Union. "It is a well-known fact that authoritarian rulers always prefer gold," the author of the article in the German newspaper wrote.

According to Die Welt, many in the world wondered whether Putin would continue showing his economic independence from Washington after Trump's victory in the US presidential election. The  clear statistical answer to the question was given soon: Moscow continues increasing its gold reserves. Since November of 2016, Russia's gold reserves have grown by 72 tons.

Putin buys gold not only because of its possible fluctuations, but for another significant reason, the article says. The German publication assumes that the Russian president is afraid that the US dollar can be used as a weapon against Russia. Investing in gold can serve as excellent defense at this point, the article claims.

Putin is not an emotional person, political expert James Ricard believes. There is no place for emotions in the relations between the Russian leader and the new US president. Russia's interests are of paramount importance for Putin, Ricard also says.

This is a strange conclusion to make as there is traditionally no place for feelings and emotions in politics. Plus, why would national leaders disregard national interests of their states?

Yet, this is not the most important conclusion of the article in the German newspaper. According to Die Welt, Putin prioritized gold in 2007, when George W. Bush was in power in the United States. Russia continued amassing gold during the presidency of Barack Obama and will continue doing so during the era of Donald Trump.

This is what troubles the West most: neither the crisis in 2008, nor the collapse of oil prices and the Russian ruble have interrupted Russia's determination to amass more gold.

Since the beginning of the Ukrainian crisis, Russia's gold purchases continued to increase, albeit spasmodically. Ideology has nothing to do with it as this is purely a strategic plan, says Ricard.

While amassing gold reserves, Russia has considerably reduced American securities by 60 billion dollars, Bloomberg says. For the time being, Russia owns only $86 billion in US bonds.

Thus, Russia ceases to be "the main creditor of the United States." It turns out that even Ireland, Switzerland and Brazil lent more money to America than Russia.

At the same time, Putin is not alone who has been losing interest in American "candy wrappers." China, for example, has been doing the same.

The author of the article believes that the answer to all this is obvious: in times of instability of banks and geopolitical turbulence, it is the weak that gives credits, while the strong gets them.