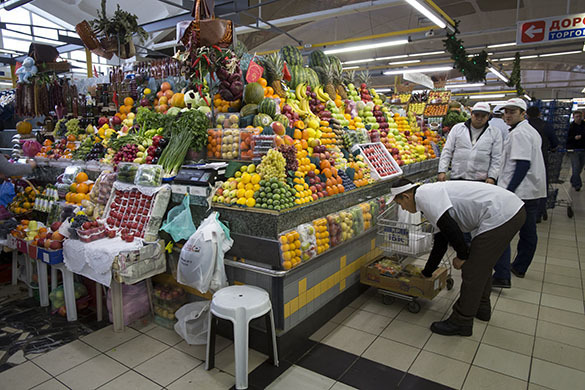 Should the restrictions be lifted, Turkey plans to increase trade with Russia to $100 billion a year.

Earlier, President Vladimir Putin noted that Russian-Turkish relations were recovering quickly. He referred to the results of the recent meeting between prime ministers of Russia and Turkey, during which Russian Prime Minister Dmitry Medvedev reported on actions to restore economic cooperation "in full format."

In March, Russia's Federal veterinary and phytosanitary watchdog Rosselkhoznadzor additionally imposed temporary restrictions on imports of Turkish peppers and pomegranates to the Russian Federation for quarantine reasons. To crown it all, Russia banned imports of Turkish eggplants on April 25.

Meanwhile, French presidential candidate Francois Fillon has recently stated that Europe would lift sanctions from Russia if Russia agreed to change its stance on the Ukrainian crisis.

At the same time, Fillon said that imposing sanctions on Russia was an incorrect way to solve the problem and noted that the restrictive measures were Europe's responsibility. The politician added that the EU found Russia's course unacceptable, but the imposition of sanctions allegedly tightened the position of the Russian Federation even more.

"We were originally pursuing a wrong policy towards Russia, that is, we pushed Russia away, and imposed sanctions on it. I am saying that we made mistakes, and one can not say that we are not responsible, because the sanctions that we imposed are our responsibility," said Fillon.

The French politician advocates a "new economic partnership with Russia."