World-famous Kalashnikov Concern unveiled its latest development at Army 2016 forum in the Moscow region: a small automatic rifle for crews of combat vehicles and special forces. 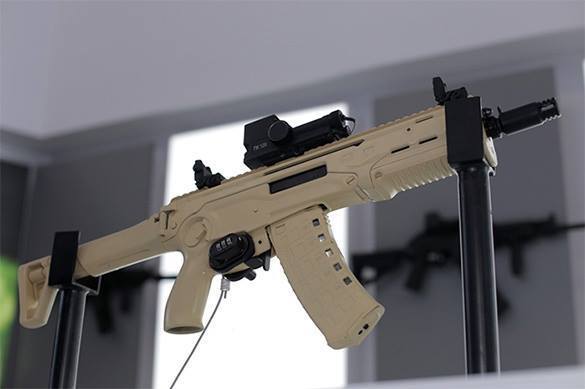 The weight of the new weapon is 2.5 kilograms; the length of the rifle with the retracted butt is 50 centimeters. The designers of the new rifle believe that the new small automatic rifle will replace AKS-74U rifle.

The new rifle was based on the developments by Evgeny Dragunov, who presented his invention at the competition of small-sized weapons in the early 1980s.

Some parts of the weapon were made in accordance with modern ergonomics requirements. The rifle has double-sided controls and Picatinny rails for mounting additional equipment and sights. The body of the new rifle is made entirely of plastic, whereas the length of the gun-butt can be adjusted.

"The components of the VSV-338 rifle are assembled in the body of aluminum alloy. The modular design allows to quickly replace the barrel. The long-range sniper rifle, developed for .338 Lapua Magnum cartridge is designed for sniper operations in all weathers , when shooting at a distance of up to 1,500 meters," the head of the press service of Kalashnikov Concern, Ekaterina Nikiforova said.

In addition to sniper rifles, Kalashnikov is said to unveil the new combat automated system Soratnik, mounted on a tracked armored vehicle. In conjunction with drones the Soratnik system can conduct reconnaissance and ensure fire support to troops.