Garbage business lives on as long as mankind exists

Few businesses in the world can compete with benefits of mining raw materials. One of them is the collection and disposal of municipal solid waste. Every year, Russians "produce" up to 70 million tons of solid waste, most of which ends up on special landfills. 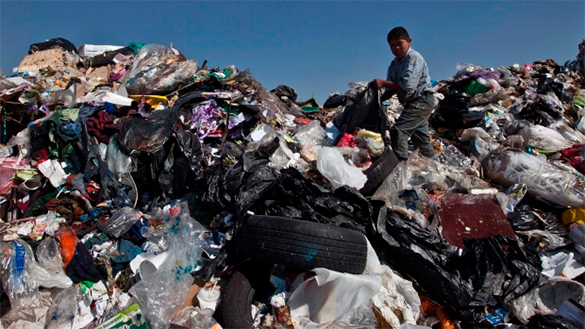 Pravda.Ru conducted an interview with Chairman of the Board of "Industry Operator for Waste Management," Dmitry Tuknov, to find out the peculiarities of modern garbage business.

Garbage is most massive product of mankind

"What do you think of our present-day consumption? Is it possible to come to any conclusion about modern consumption from our own garbage?"

"Yes, general consumption has been growing steadily. In our times, we do not own something for a long period of time. The operation of products has been decreasing. People spend more and more of their money to buy the things that they do not actually need. Solid waste is the most massive product of mankind. Man produces nothing but waste. Everything that is touched by man turns into waste - this is only a question of time. There are things that last for minutes and even seconds. There are things that last for decades, of course, but they will turn into waste some day too."

"How much waste does a Russian citizen produce a year?"

"About three cubic meters. In late December, Russian President Vladimir Putin signed the law on industrial policy, where, for the first time in recent history, collection and disposal of waste was categorized as a separate type of industry. Today, the Russian business community expects the government to finally determine a specially authorized federal agency at this point.

"We take everything from the ground, we use and process what we take, but then we eventually put everything back under the ground. The longer we use it, the richer we become. The purpose of our service is to use our resources as long as possible, to increase the service life of products and make them better. This leads to the growth of welfare of the population and increase in consumer demand. Therefore, our garbage actually regulates all kinds of industry without exception.

"When we build a house or make a pen - when we make any product - we must understand how we are going to utilize it. Unfortunately, there is no single specialized agency in Russia that would be working on adequate regulatory documentation for cars and many other things.

"If the Russian Federation reached the recycling level of 60 percent to bring secondary resources back to our economy again, the multiplying effect from this would make Russia second resource-based economy in the world.

"For many countries, 60 percent of recycling is a common standard. For some types of products, such as glass or paper, for example, it is more than 70 percent in Finland and more than 80 percent in Japan. That is, these are not sky-high numbers - these are real objectives that can be achieved.

"One can exploit people, make them work 12 hours instead of 8, so that they earn money to buy the products that will turn into waste quickly. On the contrary, one can also produce high quality products that last longer and save people's money."

"This is a very painful problem, because the purpose of world's largest corporations is to increase the turnover of consumption, to make people buy the products that they will have to change very soon. Therefore, most people have to live by the rules of those corporations."

"Yes, but you do not have to follow them. I believe that in times of crisis the sector of waste management will help people in all regions of the country. One does not have to go somewhere to find waste - waste can be found where people live. This is something that everyone has. Questions of employment can be solved through this type of industry.

"Any material resource, when it goes out of service, has three ways to go. The first one is the return of secondary resources to economy as raw materials. The second one is the use of the energy component - incineration - and the third one is burial. The last option is the most unprofitable, unfavorable and extreme option.

"Recent events associated with the introduction of moratorium on producer responsibility and failure to establish an industry on the level of the government, etc., have prompted the community to create the union of processors of waste and secondary resources. All sub-sectoral communities have participated in the decision to establish the Union. I hope that soon it will be established, and our ideas and decisions that focus on the welfare of the whole country and all people will be heard and resolved in the government."

Mankind may soon suffocate in its own garbage