Who profits from European energy alliance without Russia?

The European Union has recently presented the concept of the energy alliance to relieve Europe of its dependence on Russia's Gazprom with the help of gas supplies from the Middle East. It is an open secret that Brussels does not want to depend on Russia. Today, Brussels is a step away from victory. Are EU members ready to refuse from their own energy policy. 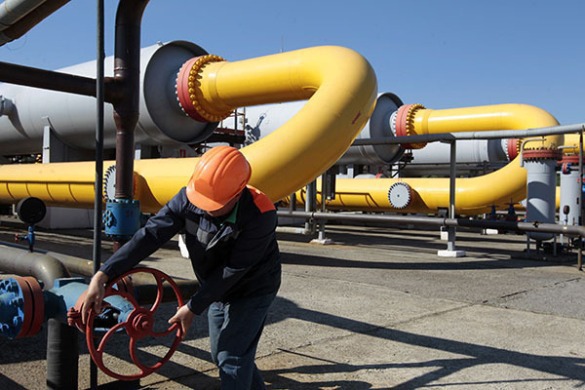 There is no real alternative to Russian natural gas

The European Commission had promised to approve the concept of the European energy alliance by January. However, the concept was presented in Brussels only in early March. The main goal of the alliance is to elaborate joint policy in relation to the import of energy resources to the European Union while gradually reducing purchasing volumes from Russia's Gazprom. Instead of Russia, Europe plans to buy more gas from Norway, Algeria, Azerbaijan, Turkmenistan and possibly Iran and Iraq. In addition, it is planned to increase shipments of liquified gas from the USA by sea.

Presently, EU members have the right to conclude contracts with suppliers single-handedly. Within the scope of the energy alliance, it will be up to Brussels and European commissars to make such decisions. This will be done to create the single market of energy resources and to reduce prices. Will Europe be able to cut the umbilical cord of relations with Russia. Pravda.Ru asked experts in the field to comment on the issue.

"In a short-term perspective, this is absolutely impossible. It can be possible in a long-term perspective once they establish systems of communication, including the system of pipelines. Even if they build the Nabucco system, they will need to build four or five of such systems to replace the supplies from Russia. This issue can be solved successfully only through enormous investment, for which Europe is absolutely not ready. One does not have to count much on the deliveries of liquified gas from the United States either," Vsevolod Kershenbaum, a representative of the Russian State University for Oil and Gas named after Gubkin told Pravda.Ru.

The only supplier, for which Europe can count on seriously is Algeria. However, there are internal problems in Algeria that may prevent the country from taking Russia's position in the next three or four years. The country remains in the midst of protests against the policies of the Algerian administration about the development of shale production. Thus, local authorities and state-run Sonatrach company intend to launch shale gas at In Salakh deposit in the Sahara Desert. The 70-billion-dollar project envisaged the drilling of 200 wells during 20 years. However, the population stood up against the project over the fears of an ecological disaster.

"When we talk about Azerbaijan or the Middle East, it is clear that this is not a question of two or three years. There were negotiations in the past to deliver natural gas from the Asian region via the Caspian Sea," first deputy chairman of the State Duma Committee for Energy,Yury Lipatov told Pravda.Ru.

Nevertheless, the EU has plenty of time to differentiate the supplies of energy carriers. Russia can not interrupt the process for the creation of the joint European energy market. Therefore, the contracts that Russia concludes with China are highly important. In the foreseeable future, Gazprom will have to share the European market with other countries.

Energy alliance that no one needs

Are EU countries ready to switch to the joint energy policy? They purchase natural gas from Russia on profitable conditions. The question remains open, and the European countries differ in their opinions when it comes to energy relations with Russia. Brussels attacked the South Stream project last year, although the majority of countries that were involved in the gas pipeline project, were very supportive of it. Russia eventually shelved the project. Nowadays, as the discussion of the Turkish Stream project continues, we can see EU countries offering Gazprom cooperation in exchange for profitable price on gas. Just a couple of weeks ago, Russian President Putin visited Budapest, Hungary, where he agreed with the Hungarian Prime Minister to extend the Turkish Stream pipeline to The territory of Hungary.

"The questions related to  state sovereignty of several European countries are so unimportant today that no one pays any attention to the,. One should pay attention to the fact most serious political and economic decisions are made on behalf of United Europe. The decisions that they make may often cause damage to politics and economy of separate members of the European Union. In a nutshell, a collective decision is considered dominant. Therefore, quite a number of European countries will fifer if they make such collective decisions," Vsevolod Kershenbaum told Pravda.Ru.

"There are contradictions. The people who rule the European Union want to take the initiative into their hands completely. My personal point of view is that a number of large European countries will not let this happen. As for Hungary, this is an example of how Hungary is protecting its interests in cooperation with the Russian Federation. Hungary may also understand that Brussels will try to put the country into the common European trend. In any case, the cost of energy resources will be a lot higher, so for Hungary it is much more profitable to solve the question directly with Russia. It is no coincidence that Hungary would like to have its own nuclear power units receiving fuel from Russia. It is absolutely fair to act as a country that that does not depend on this anti-Russian show that the West has been staging lately," Yury Lipton told Pravda.Ru.

Is there life without Russian natural gas?

EU lashes itself as Russia shuts down South Stream