President Maduro of Venezuela has recently been on a visit to China where he attended the 1st Forum China-CELAC - New directions in the relations of Venezuela and China have been opened by the recent visit to Beijing of President Nicolas Maduro, which resulted in a $ 20 billion funding for economic projects, in the areas of the energy industry and social programs. 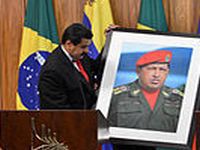 Maduro said that, as part of the agreements, the Asian giant will increase its participation in the projects of the Orinoco Hugo Chavez oil belt, where the largest crude reserve in the world is situated. According to official sources, the funding mechanisms between the two countries amount to over US $ 50 billion through 256 programs.

China is the main investor in Venezuela and is its second client in terms of oil after the United States, with a volume of 640 thousand barrels per day, according to statistics.

According to the vice president, Jorge Arreaza, the new sums and resources from China will benefit the Great Mission Housing Venezuela and the Mission Neighborhood New Tricolor Neighborhood, among others.

"Thanks to the cooperation with Beijing, we will build new schools and apartments, we will be able to implement hydropower and thermoelectric construction projects, and have positive impacts on the area of transportation and technology," he added.

According to Arreaza thus Venezuela advances towards productive socialism and leaves behind the capitalist model.

He also stressed that the Maduro trip seeks to deepen relations with oil exporting countries. Now, President Maduro travels to Iran with the intention to reinvigorate cooperation and initiate a joint strategy to strengthen the Organization of Petroleum Exporting Countries.

In Venezuela, the government initiated a broad discussion with entrepreneurs in strategic economic sectors, both public and private, in order to establish joint mechanisms of action this year.

"Building collective solutions and developing agricultural and industrial plans is one of the main goals, intended primarily to increase domestic production and substitute imports, as Maduro stated," said Arreaza.

Venezuela undertakes structural changes in 2015 in order to sustain a socialist economic model, based on productivity, he said. He adds: "In the current climate, the country has the role of leaving behind the dependence upon oil."

The government met with entrepreneurs in the automotive sector, such as Toyota, General Motors and Chrysler, which resulted in agreements focused on boosting local manufacturing of parts and spare parts. Currently, about 70% of the parts of a vehicle can be produced in Venezuela.

In the automotive sector, the government also signed agreements with commercial and supply sectors ensuring the distribution of food and basic necessities, as part of the Comprehensive Economic Recovery Plan, announced by Maduro on 30 December. Diversifying production and replacing dependence upon imports are among the actions of this program.