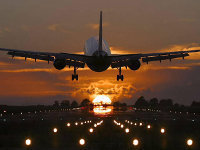 Russian Deputy Prime Minister Dmitry Rogozin wrote on his Twitter that air communication between Russia and the Crimea should be conducted with the use of domestic aircraft. "We consider a possibility for expanding the production of domestic regional aircraft, in particular Il-114," wrote Rogozin.

The statement was made soon after Dobrolet, one of the few Russian low-cost airlines, had to stop all flights. On July 30, the leasing agreement for Boeing 737-800 aircraft was terminated, which made the flights of Dobrolet practically impossible. The airline had two Boeing and one Sukhoi Superjet 100 aircraft that did not perform any flights.

Previously, Western countries introduced several packages of sanctions against Russian companies; the imposition of restrictive measures may continue. According to experts, now the fate of Dobrolet may become the story of every airline that flies to the now Russian peninsula. Aeroflot, Transaero, S7, Ural Airlines and Red Wings - all of them use foreign-made airliners). Protecting the companies that fly to the Crimea from the destructive influence of sanctions can be possible by using Russian-made aircraft for the flights.

Noteworthy, the Ilyushin-114 is a regional passenger aircraft developed during the Soviet times. The plane conducted the first flight in 1990, but mass production of the airliner never commenced due to the shortage of funding.  The aircraft-making factory, after the collapse of the Union, turned out to be on the territory of Uzbekistan.

According to experts, the Il-114 is the only Russian regional aircraft, the production of which can be established within the shortest period of time, the Arguments and Facts newspaper wrote.

Board of Directors of JSC Aviakor - Samara Aviation Plant decided to organize mass production and commercialization of the Il-114 and approved the "road map" of the project, Itar-Tass reports. The head of the company, Alexei Gusev, said that the launch of production would require nearly five years and 10-12 billion rubles.

At the same time, there are experts, who believe that the Il-114 is an outdated aircraft model. One should pay attention to the latest development of domestic aircraft manufacturers - Sukhoi Superjet 100 (refers to the short-range class of aircraft). The plane is already in mass production, although one can not say that this is a fully domestic aircraft. The assembly of Sukhoi Superjet 100 is conducted with the use of a large number of foreign parts. The engines of the plane, for example, are produced by Russian-French company. This may cause certain difficulties, should the West decide to continue walking the path of sanctions.

Dobrolet Airline is an ambitious project of Russia's Aeroflot, one of the few domestic low-cost airlines. On August 3, the airline officially announced that it was stopping all flights "under unprecedented pressure from European counterparts."

According to independent aviation experts, Dobrolet's failure will not bring serious losses to Aeroflot, as the project could not be profitable in the next two years. However, the fact that the airline had to stop working because of the sanctions was a serious signal showing that the Russian economy is difficult to do without partners from Europe.

Some believe that Dobrolet was chosen as a target for sanctions in a carefully thought-out fashion. The airline started working just a while ago, it flew inside Russia, so the news would not produce an international scandal, nor would it harm the European economy. On the contrary, European low-cost airlines got rid of a potential rival: Dobrolet was planning to begin flights to the countries of the Old World from 2016.

Dobrolet began selling tickets on May 27, 2014. From June 11, the company launched flights to the Crimea (although it was initially planned that the airline would launch flights to St. Petersburg). On the first day of sales, May 26, a one-way ticket to Simferopol for June 21 cost 979.5 rubles ($26). On August 1, the airline began flying to Volgograd.

The company had two Boeing 737-800 aircraft and one Sukhoi Superjet 100, which did not carry out flights. Boeings were supposed to become the basic aircraft of the airline's fleet. Until the end of this year, Dobrolet was planning to receive six more Boeings (and eight more in 2015). However, the contracts for the supply of aircraft concluded ​​with AWAS, Ireland, were terminated.