Managua, (Prensa Latina) The recent announcement of an inter-oceanic canal in Nicaragua is now seen as a further step in realizing this project and as an opportunity to optimize global trade. Alberto Vega, of the company ERM - in charge of feasibility studies on the project - said in Managua that if this pathway becomes reality, it will meet current global demand for commercial transport. 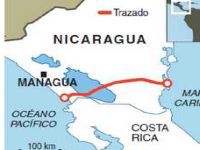 The new canal will provide service for the ships with a deeper keel and the route will be shorter between Asia and modern ports on the east coast of the United States and Europe, he said.

He explained that in the coming years, world trade will grow more than three times, which will create a greater demand for shipping capacity and will create more congestion in the Panama Canal in the next decade. To this is added the increase in the size of vessels which will exceed the capacity of existing canals and therefore a second waterway in Central America will help satisfy the demand at a lower cost, the expert explained. The same opinion is shared by Dong Yunsong, representative of HKND Group, the Chinese company based in Hong Kong and partner in this project.

For him, a canal through Nicaragua would take five percent of the world transportation trade. During the presentation of the final route on Monday, Yunsong made ​​reference to the economic benefits that this work is the infrastructure for the country, which could double its Gross Domestic Product and become one of the richest in Central America, he said.

The Nicaraguan canal will have a length of approximately 278 km, of which 105 will be a stretch of the lake Cocibolca. Its route will pass through the delta of river Brito, in the Department of Rivas, about 110 kilometers from Managua, cross the lake and be carried forward by the river Tule to the mouth of the river Punta Gorda, in the Autonomous Region of the Southern Atlantic.

Besides this infrastructure will be built two deepwater ports, an area of ​​free trade, a resort, an international airport and the various connecting roadways. According to HKND, this channel will allow the passage of 5,100 vessels annually, including ships of large size, and the transit time is about 30 hours.

Translation from the original Portuguese