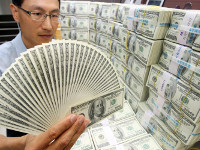 When the US Federal Reserve bought an 80% stake in American International Group (AIG) in September 2008, the unprecedented $85 billion outlay was justified as necessary to bail out the world's largest insurance company. Today, however, central banks are on a global corporate buying spree not to bail out bankrupt corporations but simply as an investment, to compensate for the loss of bond income due to record-low interest rates. Indeed, central banks have become some of the world's largest stock investors.

Central banks have the power to create national currencies with accounting entries, and they are traditionally very secretive. We are not allowed to peer into their books. It took a major lawsuit by Reuters and a congressional investigation to get the Fed to reveal the $16-plus trillion in loans it made to bail out giant banks and corporations after 2008.

What is to stop a foreign bank from simply printing its own currency and trading it on the currency market for dollars, to be invested in the US stock market or US real estate market?  What is to stop central banks from printing up money competitively, in a mad rush to own the world's largest companies?

Apparently not much. Central banks are for the most part unregulated, even by their own governments. As the Federal Reserve observes on its website:

[The Fed] is considered an independent central bank because its monetary policy decisions do not have to be approved by the President or anyone else in the executive or legislative branches of government, it does not receive funding appropriated by the Congress, and the terms of the members of the Board of Governors span multiple presidential and congressional terms.

As former Federal Reserve Chairman Alan Greenspan quipped, "Quite frankly it does not matter who is president as far as the Fed is concerned. There are no other agencies that can overrule the action we take."

That is how "independent" central banks operate, but it evidently not the US central bank that is gambling in the stock market. After extensive quantitative easing, the Fed has a $4.5 trillion balance sheet; but this sum is accounted for as being invested conservatively in Treasuries and agency debt (although QE may have allowed Wall Street banks to invest the proceeds in the stock market by devious means).

Which central banks, then, are investing in stocks? The biggest player turns out to be the People's Bank of China (PBoC), the Chinese central bank.

According to a June 15th article in USA Today:

Evidence of equity-buying by central banks and other public sector investors has emerged from a large-scale survey compiled by Official Monetary and Financial Institutions Forum (OMFIF), a global research and advisory group. The OMFIF research publication Global Public Investor (GPI) 2014, launched on June 17 is the first comprehensive survey of $29.1 trillion worth of investments held by 400 public sector institutions in 162 countries. The report focuses on investments by 157 central banks, 156 public pension funds and 87 sovereign funds, underlines growing similarities among different categories of public entities owning assets equivalent to 40% of world output.

The assets of these 400 Global Public Investors comprise $13.2 trillion (including gold) at central banks, $9.4 trillion at public pension funds and $6.5 trillion at sovereign wealth funds.

Public pension funds and sovereign wealth funds are well known to be large holders of shares on international stock markets. But it seems they now have rivals from unexpected sources:

One is China's State Administration of Foreign Exchange (SAFE), part of the People's Bank of China, the biggest overall public sector investor, with $3.9 trillion under management, well ahead of the Bank of Japan and Japan's Government Pension Investment Fund (GPIF), each with $1.3 trillion.

SAFE's investments include significant holdings in Europe. The PBoC itself has been directly buying minority equity stakes in important European companies.

Another large public sector equity owner is Swiss National Bank, with $480 billion under management. The Swiss central bank had 15% of its foreign exchange assets - or $72 billion - in equities at the end of 2013.

Public pension funds and sovereign wealth funds invest their pension contributions and exchange reserves earned in foreign trade, which is fair enough. The justification for central banks to be playing the stock market is less obvious. Their stock purchases are justified as compensating for lost revenue caused by sharp drops in interest rates. But those drops were driven by central banks themselves; and the broad powers delegated to central banks were supposed to be for conducting "monetary policy," not for generating investment returns. According to the OMFIF, central banks collectively now have $13.2 trillion in assets (including gold). That is nearly 20% of the value of all of the stock markets in the world, which comes to $62 trillion.

Central banks are allowed to create money out of nothing in order to conduct the monetary policies necessary to "regulate the value of the currency" and "maintain price stability."  Traditionally, this has been done with "open market operations," in which money was either created by the central bank and used to buy federal securities (thereby adding money to the money supply) or federal securities were sold in exchange for currency (shrinking the money supply).

"Quantitative easing" is open market operations on steroids, to the tune of trillions of dollars. But the purpose is allegedly the same-to augment a money supply that shrank by trillions of dollars when the shadow banking system collapsed after 2008. The purpose is not supposed to be to earn an income for the central bank itself. Indeed, the U.S. central bank is required to return the interest earned on federal securities to the federal government, which paid the interest in the first place.

Further, as noted earlier, it is not the US Federal Reserve that has been massively investing in the stock market.  It is the PBoC, which arguably is in a different position than the US Fed. It cannot print dollars or Euros. Rather, it acquires them from local merchants who have earned them legitimately in foreign trade.

However, the PBoC has done nothing to earn these dollars or Euros beyond printing yuan. It trades the yuan for the dollars earned by Chinese sellers, who need local currency to pay their workers and suppliers. The money involved in these transactions has thus doubled. The merchants have been paid in yuan and the central bank has an equivalent sum in dollars or Euros. That means the Chinese central bank's holdings are created out of thin air no less than the Federal Reserve's dollars are.

Battle of the Central Banks?

Western central banks have generally worked this scheme discreetly. Not so much the Chinese, whose blatant gaming of the system points up its flaws for all to see.

Georgetown University historian Professor Carroll Quigley styled himself the librarian of the international bankers. In his 1966 book Tragedy and Hope, he wrote that their aim was "nothing less than to create a world system of financial control in private hands able to dominate the political system of each country and the economy of the world as a whole." This system was to be controlled "in a feudalist fashion by the central banks of the world acting in concert by secret agreements," central banks that "were themselves private corporations."

It may be the Chinese, not acting in concert, who break up this cartel. The PBoC is no more transparent than the US Fed, but it is not an "independent" central bank. It is a government agency accountable to the Chinese government and acting on its behalf.

The Chinese have evidently figured out the game of the "independent" central bankers, and to be using it to their own advantage. If the Fed can do quantitative easing, so can the Chinese - and buy up our assets with the proceeds. Owning our corporations rather than our Treasuries helps the Chinese break up US dollar hegemony.

Whatever power plays are going on behind the scenes, it is increasingly clear that they are not serving we-the-people. Banks should not be the exclusive creators of money. We the people, through our representative governments, need to be issuing the national money supply directly, as was done in America under President Abraham Lincoln and in colonial times.

Ellen Brown is an attorney, founder of the Public Banking Institute and the author of twelve books, including the best-selling Web of Debt. Her latest book, The Public Bank Solution, explores successful public banking models historically and globally.