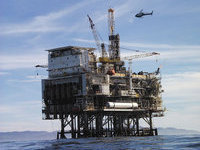 At the end of last week, Gazprom shipped the first batch of oil produced at Prirazlomnoye deposit - Russia's only project for the development of hydrocarbon resources in the Arctic shelf.

The Chairman of the Board of JSC Gazprom, Alexey Miller, and the heads of relevant departments and subsidiaries of company contractors attended the event. Russian President Vladimir Putin personally gave a command to start the shipment.

The first batch made up 70 thousand tons. The batch will be delivered to consumers in the north-west of Europe. A while back, Gazprom ordered to build two tankers  for the project, Mikhail Ulyanov and Kirill Lavrov.

This year, it is planned to produce more than 300,000 tons of oil at the deposit.

The new sort of the Arctic oil produced on the Russian shelf, ARCO (Arctic Oil) entered the world market for the first time. The buyer is one of the largest energy companies in Europe; the product was sold under direct contract. The marketing of the new sort of ARCO was conducted among refiners in the North-West of Europe in the first quarter of 2014. After the volume of production at Prirazlomnoye deposit grows, a part of raw materials will be sold on the basis of long-term contracts.

The implementation of all manufacturing operations on the deposit - drilling, production, oil storage, preparation and shipment of finished products - is being provided by offshore ice-resistant fixed oil platform Prirazlomnaya. Design features of the oil rig completely exclude oil spill, storage and shipment in its production.

To pump finished product into tankers, a complex of direct shipment devices is used. The lock system activates in a maximum of seven seconds, which also helps to prevent oil spills. The platform is equipped with two of such mechanisms that are located on diagonally opposite sides on the platform - the south-western and north-eastern.

The place of shipment is selected depending on the direction and strength of the influence of natural factors - sea roughness, ice drift, currents and wind. Should the tanker move beyond the sector served by one complex, the tanker will be unmoored and moved to another system. To exclude inadvertent collision with the platform, the tankers are outfitted with dynamic positioning, which allows to keep vessels in place, despite the impact of wind and waves.

Prirazlomnoye field is an Arctic offshore oilfield located in the Pechora Sea, south of Novaya Zemlya, Russia. The field development is based on the single stationary Prirazlomnaya platform, which is the first Arctic-class ice-resistant oil platform in the world.

In September 2013, the oil platform found itself in the center of an international scandal with the participation of Greenpeace activists, who attempted to board the platform with a banner "Don't kill the Arctic." The activists were arrested, charged with piracy, but then released under amnesty law.