Before the New Year, when the first rallies of Euro-Maidan just began in Kiev, much has been said about the country's economic ship sinking fast. Now the revolution has happened, President Viktor Yanukovych has left the country, the power has been transferred into the hands of pro-Western authorities, the country is literally bursting at the seams, and Crimea has been lost. How is Ukraine's economy dealing with these shocks? 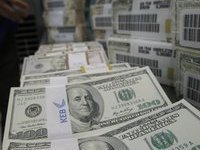 The revolutionary events were extremely hard on the Ukrainian economy, because the confrontation with Russia and internal instability have accelerated stagnation. Currently the deficits of the balance of payments and budget are close to 9 percent of GDP. Foreign currency reserves declined in February to $13.6 billion, which means that they will run out by mid-summer. Pravda.Ru wrote of an impending default in Ukraine in early December of last year, and the massive clashes in the center of Kiev that resumed in February of 2014 just confirmed the result and finally scared away investors.    It seems like now the only way for Ukraine's economy is a loan from the IMF. On Thursday, March 27, the IMF announced a loan to Ukraine in the amount of $14-18 billion dollars. The first installment of $3 billion can be recovered in April of 2014. Thus, within two years Kiev will be able to receive up to $27 billion from international lenders. Yet, according to Ukrainian media, the quasi - fiscal deficit of the country has reached $45 billion. With such a huge deficit Ukraine is practically a bankrupt, despite the fact that the residents of the country are still getting paid.

The United States has also provided support. The White House has quickly embraced Ukraine and has developed a bill to provide it loan guarantees in the amount of $1 billion, and immediate aid of $150 million to the residents of the country. Pravda.Ru talked to experts to find out whether this money will save the Ukrainian economy.

"I think they will be able to avoid a default. Washington is not interested in a default in Ukraine or its bankruptcy. So the money needed to cover operating costs will be found," told Pravda.Ru the director of the Center for Economic Research of the Institute of Globalization and Social Movements Vasili Koltashov. "But this money will be found in the form of loans, and Ukraine will have dual obligations on these loans. First, in the form of interest on loans, and second, liabilities in the form of budgetary policy. The fiscal policy of Kiev is likely to become very tough before the end of this year.

What does the international loan mean for Ukraine's population? The regional budgets will certainly be cut down with the reduction of the state funds. The proceeds from all regions (as we wrote earlier, mainly southeast of the country is profitable, while the western regions are subsidized) will be concentrated in Kiev. In all these regions the tax burden on local residents will be increased. Gas tariffs will grow by 50 percent for households and 40 percent for the industry (starting April 2014), transport fares, electricity, etc., will be increased. The population will be forced to pay off the EU funds given to Ukraine under the conditions of the standard set of austerity measures.

Even the current Prime Minister of Ukraine Yatsenyuk has already acknowledged that these measures would increase the number of poor people in Ukraine by 2.5 times. The country already has about 5 million people unable to pay for utilities, that is, 1.4 million families. With higher tariffs and cuts in the social sphere, which is required by the IMF, the number of poor families will reach 4 million, according to Yatsenyuk.   Some Ukrainians were sobered by the near economic future: "In a month, admitting that "I was on the Maidan" will be the same as admitting that I was a homosexual and a prostitute," wrote a user of a Ukrainian site. "This is genocide of the people by the economic stranglehold," said another network user.  It is understood that it was not the political upheaval that has caused the fall of Ukraine's economy, but it has definitely worsened the situation in the country.

"The situation in the economy is a depressing, and one of the reasons is the lowest price for exports, metal in the first place. The crisis is one of the economic reasons why it has happened. Former officials of Yanukovych's cabinet were associated with export products, metals, and metal prices fell sharply in the world market. The last few years there has been no money. Conversely, there was a slight rise in western Ukraine associated with the rise of agriculture," shared his opinion with Pravda.Ru economist and head of the "School of Experts" Maxim Kozyrev.

According to the expert, the consequences of the coup are such that the main source from which Ukraine may expect help is the USA. In addition, Ukrainians can seek support from China that is increasing its presence in the country's economy. However, in any case, it will be extremely difficult for Ukraine to rebuild its image in the eyes of investors.

"When someone is close to a default, only two sources can save them, a new loan or emission. Ukraine cannot be saved by emission, it can be only saved by loans. The sources of credit are the same - the U.S., the EU and China, because Ukraine has lost contacts with Russia as a lender. If it is not the IMF, it will be other sources. No one is interested in a default in principle. A default will not be allowed, because a default would mean a certain rightness of Russia, dependence on Russia, and what needed is a return from the successes that pro-Western Ukrainian politicians and their partners abroad have achieved. This will not happen," concluded Maxim Kozyrev.

What do you think about the latest news from Ukraine? What will happen to Ukraine in 2014? Will it be possible to preserve Ukraine united and indivisible? Will Ukraine avoid a default?