Russia without dollar - what are the risks?

American media outlets are scaring their readers with a possibility of Russia being isolated from the dollar in light of the developments in Crimea. They report that isolating Russia from the dollar system is discussed in preparation for a meeting between Barack Obama and Arseny Yatsenyuk. The likelihood of this measure is negligible, but another question is, maybe it is time to get off the "dollar needle"? 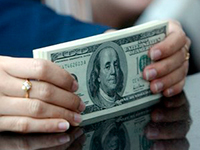 Information that Russia may become isolated from the dollar system in the framework of sanctions from the U.S. emerged in prominent publications such as The New York Times and Wall Street Journal. The possibility of introducing this sanction seems completely implausible at first glance. The dollar is a reserve currency used for international transactions and accumulation of reserves. Russia is one of the largest players in the energy market, the second largest supplier of arms, an observer in the OPEC, a member of G20 and so on and so forth.

Furthermore, Russia is the largest holder of U.S. dollars, and we must be reminded that the dollar is simply a huge bubble, currency not backed by gold but only its reputation. Economic experts interviewed by a correspondent of Pravda.Ru think that the United States can be largely affected by the dollar isolation of Russia.

"Naturally, the use of the dollar, including as the nominal currency, adds additional branding points to this currency, encourages a more active use of the dollar in transactions. This is an additional argument in favor of the importance of the currency in the global market. IF the dollar is not used in contractual documents, it means less significance for the currency that is not used, that's all. In this regard, I believe, there will be displacement of the dollar, including from the consciousness, from business turnover, and hence, weakening of the dollar, weakening of the prestige of the dollar as the leading global currency," shared his opinion deputy chairman of the Duma Committee on Financial Markets Anatoly Aksakov.

Perhaps the only thing that may cause some difficulties in the case of Russia's isolation from the dollar is the global energy market. If the gas issue can be resolved fairly quickly because there are long-term gas contracts, and there is no alternative to Russian gas at the moment, in the oil market we would have to find new payment mechanisms. Unless, of course, Russia suggests that its partners in the oil market abandon oil prices in dollars.

"In principle, of course, it must be done. Showing such an initiative would mean striking at one of the world monetary systems established 40 years ago. This system is called petrodollar standard. Under this standard all transactions in this market are made in the U.S. dollars. Of course, it would be even a more serious impact than, say, an attempt to abandon the accumulation of dollars in foreign exchange reserves, or even an attempt to lose dollars. Dumping the dollar from gold and foreign exchange reserves is problematic, because blocking by the U.S is indeed possible. This is a very serious thing, we have to prepare for it," shared his thoughts with Pravda.Ru economist Valentin Katasonov, stressing that perhaps not all OPEC members would be willing to support the abandonment of the dollar, particularly Saudi Arabia that has militarily and politically ties with the U.S, so in this case everyone would act individually.

Yet, according to a leading expert of the Oil Union Rustam Tankaev, it would not be difficult to introduce certain mechanisms that would allow Russian energy to trade without the dollar. The U.S. will feel some loss because the base of the U.S. currency as a result of sanctions against Russia will shrink noticeably.

"There is already a tense situation in the world in relation to the dollar. We all know it very well. The dollar is not a very stable currency. In the absence of other factors, the dollar is declining, and the transition to the gold standard has been mentioned many times, and other currencies were proposed," said Rustam Tankanov. "In this situation, taking any country out of the dollar zone would simply mean bringing the dollar down. Quite a significant number of commitments in our foreign reserves are in dollars. If they are dumped in the market, the U.S. dollar will significantly suffer."

As for the domestic Russian economy, our officials have repeatedly proposed moving away from the dollar dependency, simply abandoning the U.S. currency circulation in the country. This idea was proposed by the State Duma deputy Mikhail Dyagterev in 2013. A few days ago it was reiterated by presidential aide Sergei Glazyev, who said that in the event of the U.S. threats we will be forced to move to other currencies."

Although the Russian government has never seriously perceived such statements and initiatives, the idea to move away from the dollar system has long been in the air. For example, when Dmitry Medvedev was president, he proposed to create a reserve currency and suggested the ruble. Of course, today, in light of domestic economic problems in Russia, we cannot brag and say that the Russian currency could become a reserve currency. But thinking of the U.S. dollar as indispensable is more than wrong in the contemporary world.

"There are many reserve currencies, and the dollar in this case has the nominal function. It is simply a measure of the contract, and therefore, considering that currency can be freely traded in the market, there are no problems in the transition to trading national currencies," told Pravda.Ru Anatoly Aksenov. "Our biggest partner is Europe, so we will trade in euros. One of the largest partners is China, so we will trade in Yuan. Yuan - ruble, euro - ruble will not use the dollar as the currency for contractual agreements. These are purely technical issues. The question of whether to abandon the use of the dollar as the currency for transactions between Russia and India, Russia and China, Russia and Europe, was raised long time ago. Why use dollar when there is euro? It is quite a respectable currency."

Russia could have had much more serious problems if it had closer ties with the United States, but since the majority of our partners are on the Eurasian and Asian continents, it would be impossible to isolate Russia from the entire economic and financial arena. In fact, Russia is not the only country that is considering abandoning the dollar, but the entire world is seeing a gradual shift away from the U.S. currency, noted in an interview with Pravda.Ru Public Chamber member and chief editor of Expert Valery Fadeev.

"If you take, for example, our Russian foreign exchange reserves, there is a large proportion of the euro there. I think the growth of China's Yuan will qualify for the first place, and the ruble is not the last currency, so far only local, of course, and real only in Russia, but nonetheless. The hegemony of the United States is over. The U.S., of course, remains the most powerful country in the world, but not hegemonic, so it can no longer dictate its financial market terms to the world."

Do you think that Russia will benefit from the dollar isolation?