The global economic crisis dictates its own rules of the game, and businessmen who want to keep their business afloat are forced to dance to this tune. McDonald's is one of the most responsive corporations to the everyday events. Managers of this large franchise responded to the customers' need to save money, and introduced a fundamentally new menu. 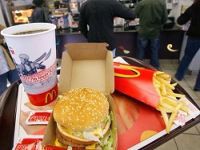 Dollar Menu is a generic name of the program that the managers of the world's largest restaurant chain McDonald's implemented several times. "Your stomach is empty - and so is your wallet," compassionately states McDonald's advertising slogan and calls for trying an economical offer in their restaurants where each meal costs only one US dollar. Customers are offered a choice of McDouble and McChicken sandwiches, a vegetable salad, yogurt with fruit, iced tea, ice-cream cone and biscuits. The morning dollar menu consists of two kinds of sandwiches, hash browns, burritos and coffee.

The Dollar Menu is a magic wand that the fast-food chain has been using each time when an economic crisis begins to affect the corporation's profits. According to Kommersant, the idea was cleverly stolen from Burger King and first introduced in McDonald's over a decade ago, in November of 2002. Then the budget menu was introduced in the United States restaurants. Later, in 2008, when the world plunged into an economic crisis, McDonald's perhaps was the only competitor that managed to increase its revenue by 11 percent with the introduction of the Dollar Menu.

Today, the need to resort to the budget option was dictated by the sales report for Q2 of 2013 that clearly showed that in view of the current economic situation customers do not buy as many hamburgers and French fries as they used to. The decline in sales was observed In European countries and immediately responded to by the marketers of the popular fast food chain. McDonald's not only resurrected the budget menu, but also devoted all efforts to promote combo meals.

Incidentally, looking back at the most exciting moments of the history of McDonald's it becomes obvious that the owners of the popular chain pay a very close attention to the attitudes in the society. For example, once the corporation was forced to make radical adjustments to their own "bible" composed in 1958 by the founding fathers. It was in 1970, when women's liberation movement advocating social equality between men and women unfolded in the civilized countries. The understanding of equality by ardent feminists was counter to the policy of McDonald's that the chain's owners followed to the letter. The rule book stated that only men were allowed to work in fast food restaurants, and women would only be a distracting "element" that would destroy the entire chain of well-thought-out process of quick orders that made the company successful.

It was pointless to contradict women fighting for their rights, and McDonald's executives made a difficult decision to start employing women, but with one condition - they had to be unattractive. The chain had no objective reasons to refuse employment to pretty job seekers, and it was decided to create a concealing uniform that would distort the shape of their figure. For the same reason, women who work in McDonald's restaurants are still not allowed to wear jewelry and makeup. The most interesting moment of this story is the fact that thanks to "unattractive" women working in McDonald's, the restaurant was frequented by married couples. As noted by managers of the restaurant chain, the wives preferred to accompany their spouses to the places where was no distractions by attractive waitresses. In contrast, other restaurants preferred hiring pretty female workers.

Given that McDonald's was able to take advantage of the victory of feminism that shocked the humanity, it is likely that the owners of the restaurant will be able to use the current global economic instability in their favor. At the very least, they will be able to soften the blow of reduced financial capacity of their clients. Residents of European countries most affected by the protracted crisis are the only ones who save on hamburgers, while the Americans and the Russians still often visit the restaurant chain.