The legally criminal haven of offshores

A lot is being say today about the collapse of international offshore business. There are real grounds for such discussions, but many people do not have an idea of ​​what offshore is. It is generally believed that "there is a secret organization somewhere that secretly rules the world." However, what is the point for such an organization to exist if it is not people, but money that rules the world? 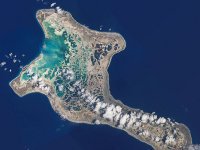 Accordingly, the world is ruled from the place where there is a lot of money. The sources of financial well-being are very hard to count, and no organization can collect them into one. Is there a place in the world, where money is never a problem? Yes, there is, and there are many of such places, although they have one common name for them - offshore.

Back in the late 19th century, taxes on employers in some countries were higher than in other ones. To avoid payments, smart businessmen began to export their capitals abroad and register their companies in the countries, where the tax burden was lighter. It would seem that one had to catch and punish such "wise men" to the fullest extent of the law, but many countries turned people's greed to their advantage. They announced a number of their territories tax-free zones. This is a brief history of notorious offshore zones, although the term itself was born on the east coast of the United States in late 1950s. Moreover, in 1981, there were already 30 of such zones. Today, offshore zones contain, or better to say hide, 60 percent of world's riches from countless countries of the world. A half of the world trade is conducted through offshore zones.

What made the governments of different countries allow offshores, or tax-free business, on their territories? The answer is simple. Offshore areas are typically the areas with extremely underdeveloped economic activities and scanty resources, where people still live. Such areas require financial support without any revenues in return. If there is an offshore business developing in the area, the need for financial support disappears. Registration in an offshore zone costs money, plus, there is an annual tax for company maintenance. This money is shared between the intermediary firm, engaged in the registration of offshore companies, and the region where companies are registered. For example, the cost of a company in Belize (there are firms that can make all documents done in just one hour) makes up only $1,400. In the Seychelles, the price is even lower - $1,150! In the state of Delaware, the service will be more expensive - $2,050 dollars a year, but two thousand dollars mean nothing compared to millions of dollars of saved taxes. However, various Internet resources say that the cost of opening an offshore company varies from 320 to 18,000 U.S. dollars, depending on the place of registration. The list of offshore zones includes the Cayman Islands in the Gulf of Mexico, the Isle of Man off the coast of the UK, the Cook Islands in the Pacific Ocean, Trinidad and Tobago, Turks and Caicos Islands, Belize and Mauritius. As you can seem there are many opportunities for wealthy businessmen to hide their money from everyone, absolutely lawfully.

Money does not stink, Roman emperor Vespasian said and surprised Rome with the introduction of taxes on street urinals. Offshore business is highly profitable for both sides; it involves both small companies and "monsters of the business."

First, offshore business brings profit to the offshore territory. Such companies are very easy to manage. Let's start with the fact that the procedure of company management is extremely simplified in offshore companies, requirements to general meetings of boards of directors are quite formal. There is minimum of reporting, audits are usually not required, nominal owners and directors are commonplace practice. Everything is done confidentially with no bureaucracy involved.

In offshore zones, you simply take your money from your "bad pocket" and put it in your "good pocket." Having a company in the Bahamas, of which no one knows, you can send money to this company, that is to yourself and hide "black money" and "black cash" there. You can also trade with yourself by paying the full cost of goods "there" and then selling it "here" with a minimum markup, saving on VAT.

In general, there are many ways of how to make money in offshore zones, but one should know how to use them. For example, you conclude a foreign trade transaction, that will not be executed, but you pay 100 percent of the deal and transfer the money to the account of an offshore company. In the future, as a resident, you go to court filing for the recovery of funds from a non-resident and, of course, you receive the required court ruling. The money does not return to the country anyway. Accordingly, a group of companies that performs such actions saves up a hopeless debt in the country of the resident, who increases both gross expenses and the money on their own account, in their own offshore company.

There are a few rules for those, who want to open an offshore company, but they are very simple. The owner of the company should neither reside in the place of its registration nor receive profit there. There are also so-called "black offshore lists." Businesses open in the Caribbean and in the Pacific Ocean do not enjoy much respect, but the status of European countries such as Liechtenstein, Luxembourg, Monaco, Switzerland, Ireland and the United Kingdom is traditionally very high, but their services and taxes are rather high. In Russia (where the offshore business has been developing since 1991) there are offshore areas too, but experienced people say that the Cayman Islands are far better.