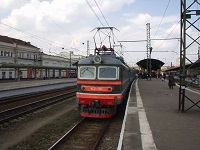 The President of JSC Russian Railways, Vladimir Yakunin, promised to find those, who "fired" him via the Internet. He expressed confidence that he had been dragged into the scandal "for some reason." The message on the resignation of Vladimir Yakunin from the position of the head of the Russian railway monopoly Russian Railways appeared yesterday, June 19th at night and caused quite a commotion among the Russian society, mainstream media, ordinary citizens and high-ranking officials.

Answering the question of who could be behind the false message that had been sent on behalf of the press service of the Russian government, Yakunin admitted that he did not know, but promised to find out. He also suggested that Russia should toughen the punishment for cyber crimes.

"This is neither the beginning nor the end of the campaign against the Russian Railways and me in person. This is one of the elements of the struggle against large-scale projects, supported by the president and the government, that the Russian Railways has been launching recently - the development of high-speed railway communication, BAM, Trans-Siberian Railway and others," Yakunin said, according to Interfax.

According to him, "the provocation shows that there are people, who would like to sow the seeds of doubt in the feasibility of the projects or participate in them for their own selfish interests."

"This provocation shows how important it is for the modern society to develop a system to combat cybercrime. This danger is relevant not only for Russia. Recall how hacked have recently hacked the AP Twitter account and posted a message there about an explosion at the White House and the wounding of Barack Obama," said the head of Russian Railways.

"Everything in the world happens for a reason. If it happened, then it means that somebody wanted that to happen. Who needs that? Any development, economic or social, always causes violent reactions. It just fell down on me. This does not mean anything, we continue to work," Vladimir Yakunin said.

Yakunin was confident even the night before, when the news of his resignation became known during his meeting with President Putin.

"There was an informal business meeting with the President. A stewed wood grouse was served. ... The news did not ruin my appetite. I ate the grouse," Yakunin told Interfax.

Yakunin had to answer the question of whether the story of his resignation could ruin his relations with First Vice-President of Russian Railways, Alexander Misharin. "Of course not," he said.

It was Alexander Misharin, who was announced the new head of the Russian Railways yesterday. Misharin himself was traveling by high-speed train at the time, when the news was made public. A Russian news portal even reported that Misharin confirmed his appointed and said that he was accepting congratulations. Today, however, Mr. Misharin stated that he had not given any comments to journalists.

The news about the resignation of Vladimir Yakunin from the post of the President of the Russian Railways arrived at Russian news agencies at about 8:00 p.m. on June 19th. Soon afterwards, when several high-ranking officials rejected the information, journalists noticed that there was a rough mistake in the text of the news message.

However, the incident can hardly be considered a joke. The people, who created the news message, were too scrupulous in their work. They issued the message in the company style of the press service of the Russian government and forged the sender's address. The properties of the electronic document said that it was created on June 18 at 13:25; the author of the document was indicated as def_usr, which is the author of real press releases of the Russian government.

However, IT-services of news agencies quickly found out that the message arrived from the IP-address that did not coincide with the address of the press service of the government.

The analysis of the logs of the message, conducted by Digit.ru, showed that the true sender of the fake report was aprf-gov.ru domain. It differs from the real domain with only one character: the government's domain has a dot instead of the hyphen - aprf.gov.ru. Domain aprf-gov.ru was registered on June 16, 2013 through domain registrar R01. According to specialists of Digit.ru, the fake message was a professionally conducted action.