Russia's Kaliningrad enclave has turned to the West. Producers of the region are trying to refocus on the European market, but they can not compete so far. However, officials are going to continue to move in this direction. In the near future, the region plans to set up several companies to manufacture products for foreign markets. 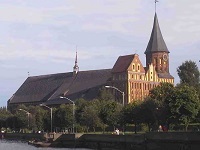 "I believe that we have enough competence and high-quality products in the region that are certified on Russian conditions with shipments conducted to the Russian Federation and the CIS countries. The question of the promotion of products for export is both a political and an administrative question. The most important aspect is single position of the Russian Federation regarding the perspective to enter the foreign market," Dmitry Chemakin, the Minister for Industrial Policy of the Kaliningrad region said, according to Mail.ru.

Meanwhile, previous attempts to create conditions for the development of trade relations in the Kaliningrad region failed. In accordance with the Resolution of the Government of the Russian Federation from February 3, 2007, special tourist and recreational economic zone Curonian Spit (Kurshskaya Kosa) was established in the region. The development program for the new zone was developed accordingly. The financing of the economic zone was launched in 2009.

However, in late 2012, it was decided to close the Curonian Spit zone. During the entire existence of the zone, no investor has shown any interest in it. Therefore, the money invested in the zone was wasted.

"To date, not a single resident has been registered in the special economic zone, private investment has not been attracted. The funding of the infrastructure was suspended in March 2009," a December decree of the Russian Government on said.

Special economic zone is a territory of special legal status in comparison with the rest part of the state. The zone provides economic benefits to entrepreneurs, both foreign and domestic ones. The main objective of creating such zones is to solve strategic objectives of both the state on the whole and the special economic zone in particular. These advantages attract investment and thus allow to establish foreign trade relations. Technically, the people residing on the territory of special economic zones are supposed to receive benefits too, through the development of the social sphere, the construction of new facilities and the appearance of opportunities that did not exist in the region before.

However, to accomplish these tasks is not always possible in practice. Therefore, the law provides for a logical possibility of early termination of a special economic zone, should the latter prove to be inefficient. The criteria to estimate inefficiency are simple. Under Article 6 of the Federal Law "On special economic zones," the zone can be liquidated if no investor is registered on the territory of this zone during the period of three years.

The authorities of the Kaliningrad region were waiting for more than five years in the case with Curonian Spit. Eco-tourism, for which the zone was created,  proved to be non-demanded. Curonian Spit united six separate tourist areas. Local authorities were making promises to take the process under personal control, but hopes for profit were going up in smoke despite all promises. The zone was closed.

Now the Kaliningrad enclave has a new project that local authorities promise to bring to reality. For the time being, the project does not bring any positive results yet, but officials say that with the support of the federal budget success is guaranteed.

Perhaps, the most successful company of the Kaliningrad region is Autotor that assembles BMW, Chevrolet, Hummer and Kia vehicles. According to studies, the company holds a third of the economy of the region. One can not say that the company is oriented on the Western market. Other large companies in the city can hardly hope for a surge of interest in their products. One of them is Shipyard Yantar, and the other one is the Kaliningrad Carriage Works.