Last week, the world commemorated the Digestive Health Day. As usual, the day passed unnoticed for most of us. This day, though it was founded more than half a century ago, has not been able to gain noticeable popularity. Originally, the day was intended to draw attention to the problem of healthy food that becomes more and more serious every year. 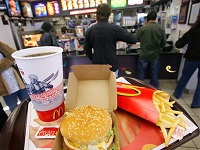 The problem has many aspects. It includes hunger that affects every seventh person on the planet, the quality and safety of products that people consume, and finally, unbalanced diet. One of the most dangerous reasons that leads to unhealthy and unbalanced diet is the world's addiction to fast food.

The world's first fast food chain appeared during the 1920s. In 1921, White Castle opened in Kansas. The company offered people a previously unknown dish - hamburgers. At first, customers showed interest in the new product, but were rather cautious about it. To overcome the obstacle, White Castle set low prices on burgers - five cents. The price remained unchanged before 1946. Secondly, the company hired actors, who, dressed in white robes, would drop at White Castle restaurant at lunch time to have some hamburgers. This created an impression that even doctors ate the new food. Therefore, the food was not only harmless, but also very healthy.

In 1940, the most serious competitor to White Castle, McDonald's, was founded. Very quickly, McDonald's developed its own principles of fast food. Following the opening of its first restaurant, that opened in a small town of San Bernardino, California, many other restaurants of the chain emerged later. By 1956, the U.S. had 14 McDonald's restaurants, and by 1960 - 228. In 1968, McDonald's celebrated the opening of the 1,000th restaurant. To date, the corporation has more than 30,000 restaurants in 119 countries around the world.

Other fast food chains were appearing and growing too, both of global and quite local scale. Some of them would consist of two or three restaurants. Medics soon began to sound the alarm because of how quickly the fast food movement was gaining momentum. The food served in fast food restaurants was rich in sugar and saturated fats, as well as chemical food disintegrating agents, coloring agents and flavorings. Such food affects metabolism, digestion, the nerve tissue, the activities of the brain and the heart - it affects highly negatively the human system on the whole.

However, rooting out fast food was not so easy. People became "addicted" to it as they get addicted to drugs. Initially, when anti-fast food campaigns were gathering pace, the dependence on it was not that large, but the public outrage was lower. Nowadays, the dangers of fast food are known to neatly every person alive, but humanity's dependence on fast food had increased considerably. Needless to say that people can live without hamburgers, donuts, pancakes or sandwiches. People became "addicted" to the concept of fast food. Life is fast and dynamic, and many people living in large cities turn to fast food chains when they feel hungry. This meal can be eaten on the run, in a car, on the subway, it can be purchased in five minutes, without interrupting a phone conversation.

The problem of the proliferation of fast food has become most serious in the world in the in the U.S.. Obesity has become one of the symbols of America. Despite the active struggle with the phenomenon, little has changed. Finding healthy food in New York can be difficult. One can find it, of course, but when doing it on the run, then finding something other than hamburgers, donuts and pancakes is not a piece of cake at all. Even grocery stores, where one could buy fruit, juice or yogurts, are rare.

While America is trying to struggle against fast food, other countries give such products a hearty welcome. For example, the most visited restaurant of McDonald's chain is the one located in Moscow's Pushkin Square. It served 2.8 million visitors in 2008.