Many became highly concerned last week, when it was said that Russia was forgiving Cuba nearly $30 billion of debt. What a gesture of good will! Journalists speculated that Russia had thus received access to the Cuban shelf. Afterwards, Russia will be able to explore and extract mineral resources in Cuban waters. 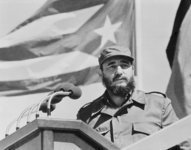 As they say, friendship and money do not mix. Why did Russia suddenly become so generous and publicly announced the decision to write off Cuba's debt of $30 billion. According to the Kommersant, it is certainly not the matter of forgiveness. The Russian authorities have laid the eye on the Cuban shelf, where company Zarubezhneft (Russia) began drilling in deep areas in December 2012. This phase of the exploration of the Cuban shelf will end only in June 2013.

To date, nothing has been said whether Zarubezhneft has found something or not. However, experts say that there was obviously a good reason, for which the Russian authorities forgave Cuba the Soviet debt only a month after the exploration works began. Apparently, in addition to fine cigars and rum, the Cubans have found something to offer to the Russians, experts say.

"The Cuban shelf is quite promising, with a large resource base, but, for the time being, it has not been developed, so the work on the Cuban shelf bears certain risks for both Russian and other companies, - Investkafe analyst Julia Voitovich told Pravda.Ru. - There are risks that some geological reserves may not be confirmed. Nevertheless, I believe that it is beneficial for Russia to participate in the development of the Cuban shelf not just to increase oil production and sales, but also to receive additional technologies and experience on the shelf. Largely, the work of our Russian companies abroad, including in foreign shelf projects, primarily pursues the goal to obtain technological capabilities. And I think that from this point of view, the work on the Cuban shelf of Russia would be interesting."

Meanwhile, the Kommersant newspaper, looking ahead, wrote what place Russia can take on the world market, should the wildest dreams come true and a significant amount of minerals is found on the Liberty Island. If Russia finds oil there, the country may become a supplier of hydrocarbons for the United States.

Assumptions of large reserves of black gold on the north coast of Cuba first appeared in 2008. Several companies started to explore the Cuban shelf: Venezuela's PdVSA, Petronas of Malaysia, the Spanish Repsol, and the Russian Zarubezhneft. However, the results were bleak. Oil was not found, but Russia believed that it was early to give up. The work that Zarubezhneft currently conducts on the shelf targets deeper parts of the coastal areas of Cuba.

The interest of the Russian company is also based on the agreement with the Cuban state company Cupet, which both parties signed in the autumn of 2009. In this document it was said that should Russian developers find oil, then Zarubezhneft would be entitled to share products with the Cuban state company up till 2034. Russians rigs will not be removed from the region before summer.

However, the Cuban shelf is not the most important factor when it comes to the Cuban debt to Russia. Russia and Cuba may open a new stage of relations with each other. During his recent visit to Cuba, Russian Prime Minister Dmitry Medvedev signed ten agreements with President Raul Castro. Incidentally, there was not a single representative of the oil sector among the Russian delegation.