Lake Baikal to be relieved of stinky paper mill

It seems like the sad story of pollution of the deepest lake in the world will be getting a happy ending. The Russian government has announced the closure of the paper mill that has been polluting Baikal for half a century. It will take time to shut down the production, but by 2015 the main cause of the lake pollution will be eliminated. The most difficult task is to restore Lake Baikal.

Russian media quoted Prime Minister's loud statement about the gradual closure of the Baikal pulp mill by 2015 and the final elimination of the consequences of its activities by 2020. Good news came from the Deputy Prime Minister Arkady Dvorkovich, who also said that it did not mean the complete closure of the plant, but only a transfer of the production capacity to other facilities. 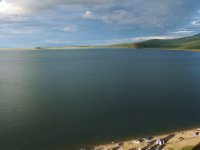 "We made a decision to gradually shut down the Baikal Pulp and Paper Mill and transfer production to other plants. This is a complicated process, but in it can be implemented in a few years," RIA Novosti quoted the Deputy Prime Minister who made this statement at the National Forum of the wood industry professionals.

The Baikal Pulp and Paper Mill prospered, dumping waste in the largest body of fresh water in the world since 1966. After more than half a century, in 2008, the company stagnated, which led to accumulation of debts. However, the lake condition did not improve because of the financial difficulties of its main enemy and pollutant. On the contrary, environmentalists and environmental enterprises were unsuccessful in their attempts to shut down the plant that had to continue working to pay off its debts. Eventually Vnesheconombank got involved.

Recently, General Director of "VEB Engineering" Dmitry Scheibe conducted a feasibility study of remediation and rehabilitation of the area. According to Scheibe, the area occupied by the plant can be included in the special economic zone of recreational type "Gate of Baikal." The plan includes building hotels, resorts and production of environmentally friendly products.

Duma deputy Maxim Shingarkin, a member of the Subcommittee on Water Resources that controls the situation with the pollution of Lake Baikal, told Pravda.Ru about the struggle for the deepest lake in the world:

"Environmentalists have been trying to shut down the plant since the moment the decision on its construction was made. The rational point of view based on the idea that such universal gem ​​as Lake Baikal (that belongs to the World Natural Heritage Site) may be at risk because the activities of a single, albeit a very important industrial enterprise, have triumphed. The decision announced by the government today is a natural progression of a phase of a complex struggle of people thinking of common cultural and natural values against people who recently got various economic preferences out of the enterprises and the government, using the fact that they own the plant. Essentially they received unfair income, threatening one of the most unique natural gems in the world," said the deputy.

Mikhail Slepenchuk from Buryatia is also a member of the Subcommittee on Water Resources under the department of Natural Resources, Environment and Ecology, and Georgy Karlov from Sakhalin is the Chairman of the Subcommittee. According to Shingarkin, Subcommittee on Water Resources is supervised by the Fund for Protection of Lake Baikal, founded by Michael Slepenchuk. "We are on the board of this organization in order to attract the maximum attention of public officials, citizens and businesses to the issue. We are using our position as Duma deputies to aim the public policy implemented in respect of Lake Baikal at the soonest elimination of previously accumulated damage from the plant," said the deputy. He stressed that the plant's activity was substantially limited in the last ten years.

Shingarkin explained that funds at different levels were allocated in the previous years to minimize the risk to the lake from the plant. However, there is still a potential risk to the lake, so the Subcommittee on Water Resources will continue to oversee the situation during two or three years prior to the final closure of the Baikal Pulp and Paper Mill and full implementation of state policy measures regarding Lake Baikal and the accumulated damage. During this period there will be no material adverse impact on the lake.

"Now the government is faced with an extremely complex task of rehabilitating the shore of Lake Baikal, managed by the paper mill. This is an extremely expensive undertaking that requires unique technological solutions. Because of the scope of accumulated damage it is difficult to imagine anything similar somewhere else in the world. Considering the balance of a potential threat to the shores of Lake Baikal and the value of the object, this is the most important task of civilization," summed up Maxim Shingarkin.