If average Europeans or Americans want to maintain the current levels of their consumption, they will need three more "reserve" planets with the same amount of biological resources. Analysts say that the year 2023 will become the point of no return, after which consumers will either vanish or they will have to fundamentally change their lifestyle. 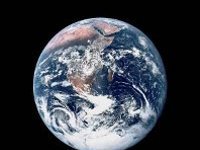 The amount of spending on New Year's Eve in Russia confirm that people still prefer to spend as much as thy can on themselves. Millions enthusiastically bought food and alcohol, spent a lot on entertainment and clothes.

Economists may find this information as good news. People earn money and then spend it, which means that the country's economic pulse is beating well. But those who prefer to look a little further than the next weekend, will see the signs of an impending disaster in these figures.

A book titled "We Were Consumers: Four Scenarios in 2023" was published in the Russian language in the beginning of this year.  A group of Finnish scientists, economists, sociologists and ecologists tried to predict our future by 2023.

The year 2023 was not chosen by chance. According to calculations of climate scientists, 2023 is to become the point of no return. If the amount of industrial emissions in the atmosphere continues to grow by that time, global natural disasters will be inevitable.

The maximum permissible level of carbon dioxide in the atmosphere is 450 ppm. A hundred years ago it was 280 ppm, now it is 380 ppm. One should not be amazed at disastrous floods, droughts, torrential rains and other natural disasters.

Modern industry has to work hard to service the growing appetites of mankind. According to experts, in the end of the first decade of the 21st century, every person was spending 1.25 times more resources than the biosphere allowed. A resident of Finland was spending 4 times more. In other words, to maintain the same level of consumption in developed countries, one would need four Earth-like planets.

Why we are so "hungry"? Do we really need millions of tons of food, clothes and so on? Of course not. It was clear already during the 1930s that all the world's needs in food could be satisfied with a three-day working week.

It is interesting to imagine what the world would be like if people had to work only three days a week. We would not need to live for making money.  There is no doubt that most people would easily find something to do during free time. Non-material human beings would become much more harmonious creatures, because they would no longer need to compete with each other for a piece of bread.

But it happened the other way. A rigid model of consumption was imposed on mankind. Advertisers and PR people did their best to make everyone believe that buying something new would not be based on the actual need to buy something. They made people want new things to become a part of the new wonderful world, where a car makes any man a macho, and a new dress makes a woman a star. As a result, people measure each other with the things that they possess. The majority of people constantly compete with others - "who has the most" - which means that sky is the limit for consumption.

Consumption paradise is coming to an end, though. Many of those living on this planet today has never made it into this paradise, though. But this is the way the world works: one-fifth part of mankind takes nearly 77 percent of the world's resources. Poor people will not see any changes, but wealthy and well-to-do individuals will have to fundamentally change their lifestyle.

Pure water becomes a rarity. The poor begin to drink carbonated drinks and suffer from severe poisonings. Employees of large corporations are more or less fine, but this is not going to last long.

The second scenario is even more encouraging. Countries do not play a special role - local communities come to power. People begin to organize their lives and control how neighbors consume resources. Everyone switches to local products, because transportation becomes unaffordable and even impossible. Mass market is dead.

Medical expenses will be considerably cut. However, people will switch to healthy vegetarian diet, which will let them stay healthy at a much greater extent than they are now. The number of cars on the roads sees a considerable reduction as well; petrol becomes precious liquid.

The third scenario involves the World Government that saves the world. In the fourth scenario, the EU is given the role of the savior, which is almost the same, although a lot less possible.

Countries no longer have sovereignty; they must observe agreements relating to the environment, not to be punished by the World Government. All religions of the world will merge into one social movement, the main goal of which is to save the planet.

Excessive consumption will disappear, people will have different priorities and values. They will have to work a lot less.

It goes without saying that the concentration of power may lead to the appearance of dictatorship and oppression of those who can not or will not fit into the system.

In general, the choice that mankind is facing is quite narrow. Future generations will have to choose between the dictatorship of the world government and global natural disasters.