Norway and Iran, together with oil

The Norwegian ambassador in Iran, Jens-Petter Kjemprud, spoke on Sunday of his country's readiness to deepen cooperation with Iran in the energy sector.

Kjemprud's statements were made during the meeting held on Tuesday with Rouyvar Eshaq, public relations director of the Iranian oil ministry in Tehran, capital of Iran, on Sunday according to the Iran's oil and energy information network (SHANA, for short in English).

He also praised the quality and content of the monthly Iran Petroleum, published in English by the public relations office of the Iranian Ministry of Petroleum.

Finally, Rouyvar was invited to make a visit to Norway to expand mutual relations and observe its energy industry closely.

Meanwhile, for his part, Rouyvar expanded upon Iran's capacity in technology and human resources. He also invited Kjemprud to visit in Assaluyeh, located in the southern province of Bushehr, to view the achievements of Iran's oil industry.

In early 2012, the United States and the European Union (EU) imposed new sanctions on the financial and energy sectors of Iran on the pretext that the country pursues objectives beyond its civilian nuclear energy program.

On October 15, the foreign ministers of the EU agreed to a new round of anti-Iranían sanctions.

Iran, however, rejects these allegations and argues that as a signatory committed to the Non-Proliferation Treaty (NPT) and a member of the International Atomic Energy Agency (IAEA), they are entitled to use nuclear technology for peaceful purposes.

In addition, the IAEA has conducted ongoing inspections at nuclear facilities in Iran and has never found any evidence that the nuclear program of Iran had been diverted to military purposes.

Although Norway is not a member of the EU, in the past it has aligned itself with EU sanctions. 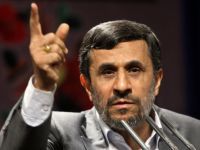