The Russians, who shared the horror of impending apocalypse with the rest of the world, spent 30 billion rubles on the eve of December 21st. The calculations were made by FBK analysts, who examined the data on the structure of trade turnover and services purchased in December. The end of the world did not come, but many people have to deal with its consequences now - the shortage of money. 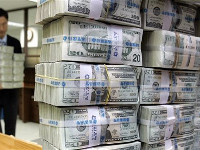 The hype around the "end of the world" still goes on. There are people, who programmed themselves for apocalypse. They still believe that it is too early to relax, because the end of the world has been pushed back to another day. Some others have been living in bunkers for five days already. A more mercantile and less trusting part of humanity counts the losses from preparing for the doomsday.

Analysts of the Russian audit and consulting company FBK conducted a detailed analysis of the data on retail trade turnover, the volume and structure of paid services in the last month of 2012. As a result, they were able to figure out that the Russians spent a total of 30 billion rubles to prepare for the long-expected doomsday.

The bulk of this amount includes the range of services and products, such as candles, salt, sugar, dry alcohol, buckwheat and stewed pork. The Russians also spent a lot on drugs, including those for the treatment of cardiovascular diseases. The pre-apocalyptic spending of the Russian people was just as absurd as it was curious and even brave. Some of our fellow citizens decided to travel to the heart of Mexico, the home of the Maya, purchasing one-way tickets. Others decided to see the end of the world on paradise islands. The people who were not ready to say goodbye to their life in any part of the world, bought tickets to not so remote places - the bunkers, where they were going to survive the impending disaster.

Many Russians went to special training courses to be able to see the "end of the world" in as real men and women. During such classes, "tutors" advised their "students" should stock up on water, candles and matches instead of electricity. The "tutors" also tried on the role of psychologists and advised citizens to apologize to their friends and family, to pay off debts. Five days after the doomsday, many "students" may have regretted spending their money on such courses. However, their "teachers" and organizers of this business were happy to count the profit earned on superstition.

Insuring companies rub their hands too. The citizens, who decided to insure their lives, organized a nice bonus for insurers on New Year's Eve. Bookmakers also count their profit that they made while expecting the world to disappear.

FBK Director of the Strategic Analysis Department, Igor Nikolayev, said that in November this year, "retail trade on the fact made up 1892.7 billion. Judging by the experience of recent years, the December turnover exceeded the turnover in November by 19-20 percent, which is about 2.3 trillion rubles.

These quite conditional calculations led to the figure of 23-24 billion rubles that were allegedly spent on the preparation of the day of December 21st. Nikolayev decided to round this amount to 30 billion rubles saying that many Russians began to get ready for the end of the world before December.