Russia to spend billions to please fans at World Cup 2018

Leisure of Russian football fans will be organized for 3 billion rubles. This is the amount the Russian Ministry of Sports proposed to allocate for a program that would allow uniting the fans in different Russian cities during matches of the World Football Championship in 2018. The money would be spent on creation of fan zones - sites where championship games would be broadcast. 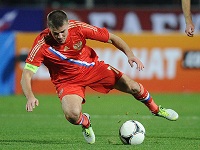 It is planned to build these zones on the entire territory of Russia with the exception of Far East region where they are unlikely to attract attention of fans given the time difference and, respectively, inconvenience with matches broadcasting. The fan zones will be organized under the auspices of FIFA.

The sum of 3 billion rubles requested for the initiative is significant. For comparison, for acquisition of equipment for quickly erectable sports facilities on the entire territory of Russia in 2013 the federal budget allocated the sum that is almost twice as small - 1,7 billion rubles. However, organizers believe that the expenses for construction of fan zones would be fully recouped at the expense of sale of souvenirs and beer on their territory. It appears that the organizers expect the main income from beer sales.

Despite the fact that since 2005 sale of beer, as well as other alcohol beverages, is prohibited in all sports facilities of the RF, this fall before FIFA World Cup-2018 it was planned to reconsider this ban. The officials want to bring beer back to stadiums and mass sports actions. The rules of FIFA allow sale of beer in fan zones. Another issue discussed at this time is whether fans should pay an entrance fee to access fan zones. On the one hand, this would help to substantially increase profits, but on the other hand, this would adversely impact attendance of fan zones.

Meanwhile, their popularity is very important for the organizers. After all, its main goal is not the economic benefit, but the decrease of level of fan aggression during the Championship. The idea to gather fans in one place and give them access to beer, at first glance, seems ambiguous. However, the consensus is that FIFA has had positive experience in this regard. The football federation has ample experience of creating such fan zones around the world. Incidentally, in terms of profitability they are second only to the sale of tickets to the matches, Izvestiya reported quoting the president of the public movement "All-Russia fan association," Alexander Shprygin.

"For the development of the game, for its popularization, it is really good. Such a step as creation of fan zones will promote popularization of football," a Soviet and Russian football coach, two-time winner of the title "The Best trainer of Russia" Gadji Gadjiev told "Pravda.Ru." "As for aggression that may manifest itself during these games, I would only worry about such possibility if our team was playing. If we broadcast games, for example, between Italy and France, then there is no point to fear aggression."

In order to prevent emergencies and manifestations of aggression, Gadjiev recommended that the organizers and law enforcement bodies conduct preventive and educational trainings, as well as take into account positive experience of foreign countries.

"In England they managed to do it," he reminded. "We remember that the aggressive English audience was disqualified for three years from all international club competitions. This served as a good lesson. Look at the fans now: full stadiums and a hundred percent order."

The only serious violation during mass broadcasts of football matches in the RF took place in 2002. Then on Manege Square in Moscow during the games between Russia and Japan mass riots ensued. According to law enforcement officials, seven to eight thousand people participated in these riots, 75 people were injured, 49 hospitalized. In addition, there were mass cases of vandalism: 107 damaged cars, several damaged trolleybuses, 36 broken shop windows and other damages. Hopefully, creation of fan zones for World Cup-2018 will not lead to similar results in Russian cities.