The European Union and ten Latin American countries have signed an agreement at the headquarters of the World Trade Organization (WTO). The agreement, as it is expected, will put an end to the "banana war". The standoff continues for two decades. The "war" began in 1991, when largest transnational corporations under the cover of the governments of Latin American countries accused Europe of protectionism. 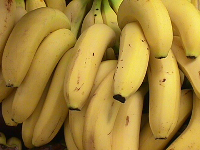 Every year, more than 130 million tons of bananas are grown in the world for sale. During the 1960s, the introduction of bananas in the diet of Western consumers became one of the most successful operations of brainwashing.

Nowadays, 95 percent of U.S. households buy bananas every week. Studies show that bananas take a serious place in regular budgets of American families. The spending on bananas is only slightly lower than the spending on gasoline. Bananas are the best selling fruit in the UK: the Britons eat over 3 billion bananas a year. The former "Gem of the British Crown" is the world's largest producer of bananas. India grows a tenth of all bananas grown in the world, but the country does not send too much of its bananas for exports. There are many countries that grow bananas for domestic market - India, Brazil, China, Thailand.

The U.S. corporations, working mostly in Latin America, dominate the international market. Latin America and the Caribbean region provide about 70 percent of bananas for the world market. Another major exporter is Africa's Uganda. The struggle for the European market worsened in 1991, when representatives of the powerful banana republic of Costa Rica accused European countries of protectionism that grant preferences to African exporters of bananas. Latin American producers stood up for Costa Rica. The Costa Ricans, by the way, had a quota for exports to the EU, but they decided to please the other side of the Atlantic too.

In South America, the banana sector is controlled by such large multinational corporations as Dole, Chiquita and Del Monte. They are responsible for 65 percent of world exports of bananas. The list of notable players in the global market includes Ecuadorian banana company Noboa (7 percent) and European supplier Fyffes (10 percent).

The producers in Latin America, with the United States behind them, accused the EU of providing tax benefits to banana producers from Asia, the Caribbean and the Pacific. Indeed, there were actually preferences given to European colonies under the so-called Lomé Conventions. In 1993 a system of quotas was established; tariffs for suppliers from different regions were different. In 1994, several countries in Latin America signed a separate agreement with the EU to allocate fixed delivery quotas for them: 23.4 percent - for Costa Rica, 21 percent - for Colombia, 3 percent - to Nicaragua and 2 percent - for Venezuela.

The war with the assistance of the WTO was conducted between the U.S.-based Chiquita Brands with Dole Fruit on the one hand, and on the other hand - Geest, Fyffs (UK), Bargosa (Spain) and smaller companies, whose interests were defended by the EU.

The European Union gave up in 2008, and a year later, the European Parliament approved the agreement. By 2017, the duties on bananas from Latin America are to be cut by 35 percent - from 176 to 114 euros per ton. It goes about such Latin American countries as Brazil, Venezuela, Guatemala, Honduras, Colombia, Costa Rica, Mexico, Nicaragua, Panama, Peru and Ecuador.

Since 2009, the agreement has been ratified by all EU countries (the procedure was finally completed this year). WTO chief Pascal Lamy called the completion of the ratification a historic moment. "Today's signing and official notification formally and fully completes the differences of the past," EU ambassador to the WTO Angelos Pangratis said. Latin American bananas currently dominate the European market, despite the duties.

Europe buys over 70 percent of bananas in Latin America, whereas Asian, Caribbean and Pacific countries deliver less than 20 percent to the European continent. Thus, traditional suppliers may lose the market entirely. In such circumstances, the EU undertook to subsidize its preferred suppliers, such as the Dominican Republic. In exchange for a share on the market, Brussels undertook to provide financial assistance of approximately 200 million euros a year to this "banana republic". This amount, according to some experts, may help the country adapt to the new situation that resulted in the emergence of competition in the banana industry on the part of Latin America.

Banana plantations often become reasons for real, not commercial wars in the third world. In 2011, eleven people were killed in clashes in northern Honduras. The tragedy occurred after local oligarch Miguel Facussé bought four thousand hectares of banana plantations, although the land was assigned to a local human rights organization. This caused a number of skirmishes with the use of weapons. The number of casualties among local population, who tried to show resistance to "fruit" corporations in their own countries, counts tens of thousands of people.