The decision to nationalize the oil taken by President Cristina Fernandez de Kirchner is a transcendental step in winning the second independence of Argentina and throughout Latin America. The hydrocarbon is being controlled by the state for the first tume since the government of Hipólito Irigoyen until its privatization by ultraneoliberal, Carlos Menem (1992). 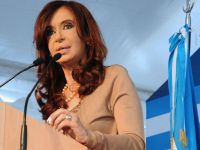 The decree sent to Congress by Cristina, whose adoption will have important votes of opposition, expropriates almost all of the shares of Repsol into nominally Yacimientos Petroliferos Fiscales (YPF) - 51 percent - it says it is in the "public interest to obtain " autosupply production of hydrocarbons and also the tasks "of exploitation, manufacturing, transportation and marketing."

Also, it established the end of the primacy of capital over a finite resource whose character has been an object of boundless speculation, as well as its condition as a developmental asset, like no other, and demands that it be under the total direction of the state for national security.

YPF, founded in 1922 by the legendary General Enrique Mosconi, its architect and director for eight years, was a public entity for which Argentines always felt great pride, not only for supplies to the domestic market, but also for its ostensible contribution to the economic and social status symbol of their sovereignty.

It should be remembered what companies from Spain did, that gave those in Latin America during the decades of the neoliberals who, by corrupt contibutions to officials openly or secretly, gave public goods and natural resources to feed their greed. Some bought at a bargain price to quickly become a profitable transnational such as Repsol, which owes its transformation into a large company to the withdrawal of Argentina, or the banks, BBV and Santander, whose profits depend on its subsidiaries in the region.

The Argentine government blames Repsol for the fall of 54 and 97 percent respectively of the production of oil and gas between 1998 and 2011, as a result of its policy of maximum use of existing wells when YPF was privatized.

Repsol-YPF, in all that time, had not invested in exploration and development of new deposits and infrastructure as it sent to its womb the bulk of the profits ($13.4 billion) and followed an arbitrary price policy, highly damaging for the Argentine economy .

The straw that broke the camel's back was the fuel account, which was still an arbitrary policy of prices, in the amount of approximately $9.4 billion.  The country was forced to pay for imports in 2011, a serious threat to its trade balance. As the high GDP growth that was maintained for nine years in the midst of a profound energy crisis and the capitalist world economy, for Argentina it is essential to ensure the autosupplying and even the export of fuel, as argued by the decree. Cristina indicated that the measure is part of the integration and energy security of South America, which is sealed, she said, with the entrance of Venezuela in Mercosur.

The initiative provides for the promotion of private foreign investment in the energy sector and public alliances with other countries. It's totally false that it would scare off investors in Argentina, as the neoliberals argue. There is tremendous interest by international capital in associating with Argentina, whose non-traditional oil reserves are calculated at 116 million barrels.

Argentina has said it will pay Repsol according to its laws, but the transnational demands an inordinate amount that Buenos Aires has rejected. The Rajoy government, in a colonial attitude, has not ceased launching threats against the Casa Rosada. Instead of doing something to improve the plight of the Spaniards - who begin to emigrate to Argentina - it continues sinking them into an unfathomable social catastrophe . But, instead, they argue for a company known as a tax evader in Spain, with the mostly non-Spanish capital, that in no way benefits the inhabitants of the kingdom.

While Brazil, Venezuela, Uruguay and Bolivia have expressed their solidarity with Argentina - as will  other governments and peoples of our America also, Washington joins the Latin American right to defend Repsol. Why is that?

* Cuban journalist living in Mexico and columnist for the daily La Jornada.