Malaysia is a unique country headed by an elected Sultan. This country in Southeast Asia in less than a half century of independence from Britain has made huge strides in the area of economics and world politics, turning from a colony into a developed country, one of the "Asian tigers". 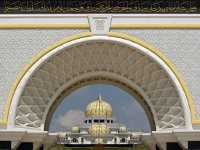 As of 2010 its GDP was $414.4 million (30th place in the world), and in terms of per capita indicators - $14,700 (57th place). While many Western countries are in a state of stagnation, Malaysia is developing at an enviable pace. On average the annual growth of its economy is six to seven percent.

It is important to note that this predominantly Muslim country has achieved success through something other than the exploitation of natural resources. Although Malaysia is rich in oil, gas, tin ores, and rare-earth metals, it made a timely bet on high-tech products, especially electronics. A significant role in its rise is played by multibillion-dollar foreign loans. But the mere availability of significant funds does not mean the future prosperity of the country. There are plenty of examples where the funds from abroad dissolved somewhere mid-way. The countries of the "third world", including Asian, and particularly monarchist ones, are infamous for the corruption, and it would seem that the failure has been programmed. However, the money that came from abroad did not settle in the pockets of the officials, but was invested in the development of the very industries that now bring income to the country.

The level of corruption was significantly reduced by Malaysian unique state system, where even the monarch - Supreme Ruler - is elected. The candidates are proposed by sultans and raja heading nine states of the country. The main function of the government is implemented by the democratically elected parliament and government. Some political analysts see this as the best evidence that the replaceable power is the most effective means of combating corruption.

This, in turn, attracts foreign investors who come to Malaysia, knowing that their business is protected by the established mechanism of legal regulations. A very attractive banking market makes the economy more credible and stable.

The political influence of this country is increasing in parallel to the economic growth. Currently, the development of relations with Malaysia is becoming increasingly more important to large players in world politics.

The role of Malaysia in the Muslim world deserves special mention. In fact, it is one of the key countries of the so-called "Islamic Group of Eight" created in 1997 by analogy with the "G8 ".

Observers note that Malaysia is the most democratic of all the Muslim countries. However, as some Western politicians complain, it does not apply to certain social norms. For example, in this country, as well as in other Islamic countries, public criticism of Islam is prohibited.

Malaysia is increasingly fighting if not for the leadership in the Islamic world, then at least for a higher place in its hierarchy. The chaos in the Arab countries contributes to this to a great extent. For the good of the state, Kuala Lumpur is even prepared to sacrifice the liberal attitudes it once had been famous for. Back in 2006, Prime Minister Abdullah Badawi emphasized that "extremism, fanaticism and violence are alien to Islam." After that the statements of an influential politician from Malaysia, former Prime Minister Mahathir Mohamad, were made. He stated that the country was in support of Iraqi insurgents. He is also the author of the idea of ​​creating a parallel of the International Tribunal and conviction of Bush and Blair - "murderers of children and war criminals."

With regard to the relations between Malaysia and Russia, currently Kuala Lumpur is one of Russia's largest trade partners in the region. The trade turnover between the two countries is growing. In 2010 its total volume was $1.711 billion dollars, in 2011 it exceeded $1.8 billion. It could have been even greater if Malaysia did not abandon the procurement of MiG-29 under the pretext of their high cost. Qatar helped Malaysia to acquire the French "Mirage."

Qatar's policy in Indonesia has failed. Local experts quickly realized that the maintenance of "Mirage" is 30% more expensive than that of "MiG." However, the behavior of Malaysia in the field of military-technical cooperation once again shows where its sympathies lie.

The relations of Malaysia with China are gradually worsening, despite the fact that Malaysia is becoming increasingly more important for the Chinese. Take, for example, the fact that 77 percent of all Chinese oil imports pass through the Strait of Malacca, located between Malaysia and Indonesia. It is no accident that Beijing calls this strategically weak "Malacca dilemma." If it is blocked, the Chinese economy would face a collapse.

The problems between China and Malaysia are not limited to the Strait. Another painful topic for China is the struggle for the Spratly archipelago in the South China Sea, through which strategically important for the global economy transportation routes pass. Fish resources and large reserves of hydrocarbons are concentrated in this area. China now vies with Vietnam and the Philippines for the northern and central islands, reefs and rocks. Soon China will openly claim the southern part of the archipelago, also claimed by Malaysia that occupies its six islands. The rhetoric between Beijing and Kuala Lumpur on the Spratly becomes noticeably more severe.

Kuala Lumpur, observing the strengthening of the Chinese "dragon," is getting involved in the regional arms race. The United States benefit from this aggravation. America has already started creating "anti-Chinese belt" where it is sucking in India, Australia, Vietnam, Malaysia and the Philippines. However, it is clear from the above that Malaysia's confrontation with China is unlikely to turn it into a "poodle of the United States."