The discovery of "flammable ice" or "Gas Hydrates", a solid form of ice-like gas appears in most of the world's ocean floor and has sparked a sudden interest in the scientific community, oil exploration companies and at the state level, engaged in research of natural resources. This interest is increasede because the first scientific assessments estimate that the volume of gas in hydrate reservoirs can far exceed that of the world's gas reserves known today. 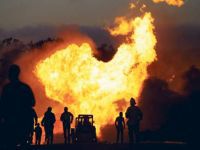 Furthermore, the scientific community suspected sudden and massive mergers of this "cold gas" caused by underwater landslides, earthquakes, etc. which can initiate the release of large volumes of methane into the atmosphere, accelerating the greenhouse effect, and in turn global warming on Earth. One of the most alarming facts linked to the discovery of these reserves in the deep ocean, is that the methane gas contained in the "submarine hydrate" is approximately 3.000 times the volume of methane contained in the atmosphere.

What is "flammable ice" or Gas Hydrates?

The gas hydrate is a crystalline solid, similar in appearance to ice, but consists of molecules of gas surrounded by a mesh of water molecules. The first samples of methane hydrate, obtained on board oceanographic vessels showed an appearance similar to a fragment of white ice. Fragments of hydrates "melt" quickly, in response to changing pressure and temperature, transforming into water and methane gas. The chunks of ice collected from the seabed are unique in that they swell when a flame is approached, hence the nickname "Flammable Ice." Although many of the known gases have the ability to form hydrates, including carbon dioxide and sulfuric anhydride; only the methane hydrate is abundantly displayed on the seabed.

Although they were discovered experimentally in 1811 by Sir Humphry Davy, it was much later in 1970, that they were detected by geophysical methods in marine sediments from the Blake Outer Ridge Foundation (USA). This scientific discovery came almost by chance, when they were looking on the seismic profiles for an "echo" double, which was a replica of the shape of the seabed, and was always associated with the presence of hydrates. This echo is called Bottom Simulating Reflector (BSR) or "Eco simulating the bottom", which is formed by reflection when waves cross the density difference between the seabed and below it.

The 'cool' seabed hydrates, in turn, performs the functions of cover, preventing the gases in the free state from reaching the surface, unless you have cracks or flaws. This "double echo" can know the depth and thickness of the gas hydrates in the seabed, as well as the presence of gas in the free state under them.

A "freeze" on the seabed

Incredibly, it has only been in recent years, when gas hydrates are considered as one of the most important sources of global energy resources, well above the currently known conventional reserves. This is like we have a freezer full of gas without thawing. A sign of the growing importance of these hydrates as an energy source is the report published by the Department of Energy of the United States, showing the strategies to follow for the next few years (until 2015) in terms of exploration and potential of these solids. The estimated world reserves of gas in hydrates are still to be investigated. As an example, the estimates of the U.S. Geological Survey vary from 100,000 trillion cubic feet (Trillons Cubic Feet, TCF) to the most optimistic of 270,000,000 TCF.

The gas hydrate, "guilty or victim" of global warming on Earth

As a "greenhouse gas", methane content in air is 10 times (according to most sources it is 21) more effective than carbon dioxide in absorbing solar heat energy and thus lead to further warming of the air temperature. Considering that the methane content on the ocean floor in a "hydrate" is approximately 3.000 times the content in the atmosphere, the ability of hydrates as a potential submarine agent provocateur of the "greenhouse effect" is huge. A large underwater landslide may cause the output of about 5 gigatons of methane from the seabed to the atmosphere, according to estimates made in the Storegga slide, Norway.

A dozen of these submarine landslides in various parts of the world, can cause the same effect, or even greater, than that caused by the emission of CO2 throughout the twentieth century.