Is financial instability the new normal? 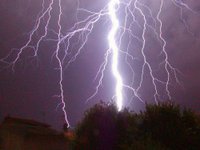 The financial world is officially going crazy.  Can you believe what is going on out there right now?  Financial markets have been jumping up and down like crazy for months and this is creating a lot of fear.  Other than during the financial crisis of 2008, in the post-World War II era have we ever experienced as much financial instability as we are seeing right now?  Should we just accept that massive financial instability is going to be part of "the new normal" in the financial world?  The wild swings that we are witnessing in the global financial marketplace are making a whole lot of people very nervous right at the moment.  When markets go up, they tend to do it slowly and steadily.  When markets go down, a lot of times it can happen very rapidly.  Also, as I have mentioned before, more major stock market crashes happen during the fall than during any other time of the year.  The last major financial crisis happened during the fall of 2008, and things are starting to look a little bit more like 2008 with each passing day.  The last thing the global economy needs right now is another major financial meltdown, but that may be exactly what we are about to get.

The Dow got absolutely hammered once again on Thursday.  It was down almost 400 points, and it has lost a total of 674.83 points over the last two days combined.

In case you are wondering, yes, that is a very big deal.

It represents the largest two day decline that we have seen since November 2008, and at this point the Dow is on pace to have its worst week since September 2008.

Over the past two days, more than 900 billion dollars of "paper wealth" has disappeared.

A couple of days ago, I discussed 21 signs that the financial world was on the verge of a nervous breakdown.  But I had no idea that things would get so ugly so soon.

So what comes next?

One of the keys is to watch what the "insiders" are doing.  Often they will say one thing and do another.

At the moment, corporate "insiders" are selling 7 dollars of stock for every 1 dollar of stock that they are buying.

Over the past couple of weeks, "insider" investing behavior has changed dramatically.  The following is from an article that was recently posted on MarketWatch....

The insiders have vanished.

The head honchos. The people who know.

Just a few weeks ago, they were out in force, buying up shares in their own companies with both hands.

For some reason, this almost always starts happening before a crash.  So obviously this is not a good sign.

A lot of normal investors have been pulling large amounts of money out of stocks as well.  The following is from a report in the Financial Post....

Investors have pulled more money from U.S. equity funds since the end of April than in the five months after the collapse of Lehman Brothers Holdings Inc., adding to the $2.1 trillion rout in American stocks.

About $75 billion was withdrawn from funds that focus on shares during the past four months, according to data compiled by Bloomberg from the Investment Company Institute, a Washington-based trade group, and EPFR Global, a research firm in Cambridge, Massachusetts. Outflows totaled $72.8 billion from October 2008 through February 2009, following Lehman's bankruptcy, the data show.

Are you starting to get the picture?

Not only that, but a third very troubling sign is that an extraordinary number of bets has been placed against the S&P 500.  As I noted the other day, if there is a stock market crash in the next few weeks, somebody is going to make a ton of money....

It doesn't take a genius to see all the dark financial clouds that are gathering on the horizon.

And all of the bad news that is constantly coming out of Europe is certainly not helping things.  For example, yesterday S&P slashed the credit ratings of seven different Italian banks.

Credit downgrades have become so frequent that we hardly even notice them anymore.

Pessimism is everywhere right now.  Suddenly it seems like almost everyone is predicting that another "recession" is coming....

*According to a recent Harvard Business Review survey, 70 percent of global business leaders believe that a global recession is "somewhat likely" or "very likely" in the coming months.

*Economist Nouriel Roubini says that we are "already in recession".

*When asked by CNBC what he thought about the possibility of another recession, George Soros said the following the other day....

"I think we are in it already."

As fear spreads, it is only going to make global financial instability even worse.  If something doesn't change, we could soon have a full-blown panic on our hands.

So why should the rest of us care if global financial markets crash and a bunch of bankers lose a whole lot of money?

Well, unfortunately our entire economic system is based on credit.  When the last financial crash happened in 2008, the credit markets got really tight.  Economic activity started to freeze up.  We entered a deep recession and unemployment skyrocketed.

As much as many of you may want to see the house of cards fall down, the reality is that when it does it is going to deeply hurt millions upon millions of innocent people too.

During the last recession (which never really ended), millions of Americans that lost their jobs also lost their homes.

Just like the number of Americans on food stamps, this is a figure that just keeps going up and up and up.

Could we eventually live in a country where one out of every five homes is standing empty?

The truth is that the U.S. economy is in the middle of a long-term decline.  The economy declined badly while George W. Bush was in office, and the decline has accelerated since Barack Obama entered the White House.

As I wrote about yesterday, the American people are feeling really depressed about the economy and 80 percent of them believe that we are in a recession right now.

So what kind of a mood are they going to be in if there is another major financial crisis and unemployment jumps up by several more percentage points?

We live in unprecedented times.  The financial world has become incredibly unstable, and none of us is really quite sure what "the new normal" is going to look like after all of this is over.

But one thing is for sure - things never stay the same for long.

The way that things have been in the past is not how things are going to be in the future.

A "perfect storm" is coming.

Everything that can be shaken will be shaken.

You better get ready.